By ROGER FARBEY
September 23, 2015
Sign in to view read count 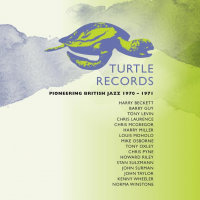 This extended analysis discusses the celebratory release of the Turtle Records story, a clamshell box set containing a fifty page, 17,000 word booklet written by John McLaughlin biographer Colin Harper which includes rare photographs and new interviews. Crucially, it also includes the only three recordings to be issued on the label. The albums, originally released in 1970 and 1971, were by British jazz musicians whose respective stars were in the ascendant at that time, namely Mike Osborne, Howard Riley and John Taylor but as much as anything the box is a paen to record producer Peter Eden who set up the short-lived Turtle Records label in 1970 because he "wanted the freedom to just go and do what I wanted to do" and did this by paying for it out of his own money.

It was saxophonist John Surman who was the serendipitous catalyst for Eden's career progression, in which he produced some of the finest records in British jazz of the 1960s and 70s. Eden had gone to hear Surman play after he'd won best baritone saxophonist in the Melody Maker polls and immediately offered to record him. This led to Surman introducing Eden to others in the heavenly British jazz firmament of that era including Mike Westbrook with whom Surman was a featured soloist, Michael Gibbs and Alan Skidmore. Ultimately, Eden produced seven of Surman's first eight records spanning three different record labels.

Eden's transition to jazz was almost accidental. Following three years devoted to producing miscellaneous rock and pop music, such as the obscure Psych group Crocheted Doughnut Ring, Eden was invited to move over to jazz on Decca's new progressive label Deram. From here on, amongst the twenty British jazz albums for which he was responsible, in addition to producing records for John Surman, including How Many Clouds Can You See? and (with John Warren) Tales of the Alonquin, he produced seminal British jazz albums albums by Michael Gibbs (including his eponymously titled debut), Mike Westbrook, Alan Skidmore and Norma Winstone. Whilst continuing to produce non-jazz albums for folk and blues artists such as Duffy Power, Mike Cooper and Heron, it was British jazz in which his impact most resonated. This period of recording coincided with the five or so creatively fertile years between 1968 and 1972 that have been coined the "Golden Age" of British jazz.

The three albums included in this box set receive their first official release and have been remastered from the original tapes. Harper has taken great care over the meticulous sleeve notes and these are populated by new interviews with Eden, Howard Riley, Barry Guy, Norma Winstone, Mike Cooper, Chris Spedding, Mike Westbrook, Michael Gibbs and the late John Taylor for whom this box set is also something of an unforeseen and poignant tribute. All of the participants on the three records whose names are prominently depicted on the box cover are, without exception, heroes of modern British jazz. Most figured highly in the Melody Maker jazz polls during this period and are unequivocally regarded as players of international standing.

So to the music itself, and following the chronological order of their release, Disc 1 is Mike Osborne's Outback (1970) which features the altoist's quintet including four colleagues from the Brotherhood of Breath, Chris McGregor, Louis Moholo-Moholo, Harry Miller and Harry Beckett. This recording featured only two titles, one on each side. "So It Is" is introduced by Osborne's alto initially stating a balladic theme but then transitioning to feverish soloing by the saxophonist for some nine minutes, followed by Beckett taking over the mantle, all the while McGregor is furiously punching out short vibrant flourishes from the piano before embarking on a solo proper, followed by Miller, the piece evolving via a whisper-like duet before being rejoined by the whole quintet and a resolution.

"Outback" starts with a majestic head played by the quintet with Miller on arco bass, progressing to a modal interlude, but at around halfway through it reverts to a more frenetic approach, whilst Moholo and Miller maintain a pulsing rhythmic imperative. Osborne is heard soloing with typical boisterousness veritably squeezing notes out of the alto. McGregor follows with a stupendously frenzied solo again followed by Miller. This culminates in a repetition of the theme, with Miller again on arco bass. The booklet also reveals the mystery of Osborne's second album, Shapes, also produced by Eden but never officially released. Osborne wanted Ogun to put it out, but as fees weren't forthcoming this never happened. Both albums are a testament to the awe-inspiring playing of surely the UK's greatest ever alto saxophonist, who sadly died in 2007 following years of enforced retirement due to mental illness.

Disc 2, Howard Riley's Flight (1971) features the pianist accompanied by two outstanding musicians, bassist Barry Guy and drummer Tony Oxley. If Mike Osborne's Outback epitomised the "free jazz" movement, then Riley's Flight was a prime example of the avant-garde scene. The majority of the music is improvised, the track with the most written notation encompassing the two ballads "For Lesley" and "For Sue." After the opening, utilising a pre-determined and super-fast melody, "Motion," by far the longest track at nearly twenty minutes in length, descends into collective improvisation with Guy playing frenetic arco bass, whilst Oxley, whose drumming is unlike anyone else's in technique and also by dint of his highly unconventional kit, proceeds to display an array of percussive sounds, including amplified drums, which partially explains why he won first position over so many successive years of Melody Maker jazz polls. The other reason is of course due to the fact that his uncompromising drumming is so iconoclastic. Oxley doggedly continued on this path and latterly, in addition to leading his own groups, has been a member of Cecil Taylor's various outfits for several years.

"Cirrus" continues with a more cautious stance, Riley plucking piano strings as well as playing the keys, Oxley producing long-sustained drum notes via amplification, and Guy extracting mournful sighs from bowed bass. The brief "Forgotten Game" sees the trio in more conventional form, by which this means "conventional" in an abstract, totally improvised setting and Guy here on pizzicato bass. The two ballads (composed by Riley and Guy respectively) evoke memories of Riley's two albums for CBS, Angle and The Day Will Come, where proportionately more was written and less was improvised than on Flight. The title track itself is another fast-paced number similar to "Motion" but minus the head and a quarter of the length of the opener. Soon after Flight, Riley gave up on trios preferring to perform solo although there have been other albums with Riley playing with others, such as the 1993 recording Interchange with Keith Tippett. Riley remains one of British jazz's most innovative pianists.

John Taylor's Pause and Think Again (Disc 3) recorded in 1971 under the aegis of Peter Eden but this time produced by John Surman, who also plays on the album, is a tour de force of ensemble jazz. "And Think Again" evinces some exquisite soloing from Taylor's future long-time associate Kenny Wheeler whilst Taylor is heard to great effect on "White Magic." This piece is redolent of tracks produced by Eden on the album Jazz in Britain '68-'69 on which Taylor, Wheeler and Surman played and which remains a modest and underestimated classic of the period. The slower-paced "Pause" gives Chris Pyne a hearing. The trombonist who was a ubiquitous stalwart of the British jazz scene, died in 1995, aged only 56. "Awakening / Eye To Eye" is reminiscent of John Surman's "Galata Bridge" from his 1969 album How Many Clouds Can You See which also featured John Taylor. It uses a similar tension and release device, slowly building-up from its initial collective improvisation. The final number is divided into two, the first section "Interlude" is performed by a trio of Taylor, Tony Levin and Chris Laurence, here given an opportunity to shine with a virtuosic bass solo.

The second part, "Soft Winds" sees the trio joined by Norma Winstone singing her own words to Taylor's tune. Pause and Think Again is a brilliant album which provides a long-lost missing link to the "Golden Age" of British jazz and serves both as an exemplar of the music of that period and as clear evidence of the talent of John Taylor, both as a composer and as a pianist. John Taylor passed away earlier this year. He had been interviewed by Colin Harper for the booklet not very long before his death and did not live to see the first official CD release of his debut masterwork. However, he did disclose to Harper, in his typically self-effacing manner, how pleased he was, that it was finally seeing the light of a reissue, saying: "It's very heart-warming to know that people feel that it's worthy of being re-released after such a time. A copy went on eBay or something or somewhere the other week. Somebody sent me an email and said 'I hope you've got some spare copies, it went for about $600...' I was rather surprised about that."

This box set undoubtedly constitutes one of the most significant collective reissues of British jazz for many years and together with its fantastically comprehensive, well-researched and informative sleeve notes surely makes this the British jazz reissue of the year.