By GLENN ASTARITA
November 28, 2009
Sign in to view read count 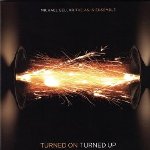 Fans of Medeski, Martin & Wood and the generally hip might dig the upbeat and refreshing sounds of keyboardist Michael Bellar's As-Is Ensemble. Its band members perform with notable artists when not on tour, amid previous duties as the house band for New York City's famed Blue Note club. And while the trio abides by a manifesto balanced with aggression, chops and clever song-forms, it manages to carve out an attention-grabbing and distinct music persona throughout.

The trio lays out a buoyant funk, jazz-rock, swing and groove quotient, via shades of the sometimes, zany New York City downtown aura. Its polytonal program, partly due to Bellar's sweeping, melodic and squirrely Hammond organ parts, complement his haunting and ethereal electric-piano phrasings. On many of these works, the band conjures up an amalgamation of textures, spiced with quirky deviations and tightly orchestrated unison choruses.

The musicians' whirling passages during "Fur Turban," tender a feisty progressive-rock vibe touched with classical overtones. But they go full circle on the following "Three Legged Dog," which is a piano trio vamp, engineered upon Spanish bravado. Then the band spins Led Zeppelin's "Misty Mountain Hop" into a wily and quite groovy, electric-piano based romp. Hence, the title Turned On Turned Up signifies a gelling sequence of musical events that aims to excite and entertain. It's a no-holds barred fest, often subdued by areas of restraint and regimented movements.