The Jimmy Heath Big Band: Turn Up the Heath 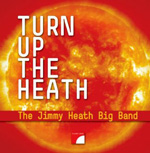 Back in the early '90s I asked tenor saxophonist Jimmy Heath if he planned a followup to his Grammy-nominated album, Little Man Big Band (Verve, 1992). As I recall, he smiled politely but didn't really answer the question. Now he has—and with an exclamation point. Describing how his latest superb album, Turn Up the Heath, came about, Jimmy writes, "The Jazz Masters award [from NEA and IAJE] in 2003 made it possible. As to why: "...there were so many orchestrations I wanted to document.

There are also special people he wanted to praise and remember, and it is entirely appropriate that Heath should begin with "Big P, a brisk and warmhearted salute to his late brother, bassist Percy Heath. "Gemini was written for Heath's daughter, Roslyn; "Basic Birks for Dizzy Gillespie; "Like a Son for alto saxophonist Antonio Hart; "Heritage Hum for "my people, and the snappy samba "One for Juan for that ubiquitous purveyor of Colombian coffee, Juan Valdez. Completing the program are Heath's "Project S and "Sources Say," and his arrangements of Kenny Dorham's "No End and the standard "I'm Glad There Is You (the last an exquisite showpiece for Heath's fluent, evocative tenor and Jeb Patton's lucid piano).

Heath's tenor is also heard on "Heritage Hum, "Gemini, "One for Juan, "Project S and "Basic Birks, his soprano on "No End. As for his colleagues, Heath says he met many of them "while playing with the Dizzy Gillespie Alumni All-Star Band, a reasonable assertion, as each one is an all-star, whether soloing or hunkering down as a member of the ensemble. The rhythm section, comprised of Patton, bassist Peter Washington and drummer Lewis Nash, is as solid and perceptive as they come, and Washington does Percy's memory proud on "Big P.

Heath's charts are delightful, fairly bursting with energy and good humor, and if I have my personal favorites, I'm sure you will too. Even fourteen years onward, this is one sequel that was well worth the wait. Turn Up the Heath, crank up the volume, relax and enjoy.

Big P; Heritage Hum; Gemini; Like a Son; I