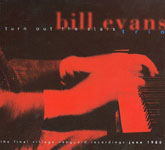 The extent to which Bill Evans' studio and live recordings have been recorded, archived and released is a testament to the deserved reverence the late pianist has elicited. Originally available only in a limited run, Turn Out the Stars-The Final Village Vanguard Recordings June 1980 is further evidence of that devout respect.

Far more lavish (and sturdy despite the individual digipaks inside)) than the accompanying box, the essays written by Bob Blumenthal and Harold Danko are extensive in their detail and focused passion, as good a means of describing The Evans trio's own playing as there is. On "Re: The Person I knew," there is no melodramatic lingering on the sweet melody, as if to telegraph its beauty rather a constant turn through its changes. If slowly rotating a fine jewel is the best way to appreciate its true beauty by viewing as many facets as possible—no one angle fully serves the purpose—so, too, is Evans and his trio's approach to a composition's melody and rhythm.

As with Evans' classic trio featuring drummer Paul Motian and bassist Scott LaFaro, the personnel at the time of these recordings—bassist Marc Johnson and drummer Joe La Barbera—does its share to make descriptions about telepathic instrumental communication the cliché it is today. Hearing them interact on both renditions of "The Two Lonely People," there is a sense of learning the contours of the composition a little better each time, as much as an increase in familiarity between the musicians. The former lesson is a means to the latter knowledge.

The breaks in the leader's playing on "Days of Wine and Roses," from the June 5 second set, allow comments from his band mates on the preceding interval, sometimes constituting reiteration but more often representing extensions of thoughts just expressed. Each musician is confident enough in his own playing and that of his peers that he can afford to pause and reflect, if only for a split second, on what's just been played, to effectively process what he's just heard.

Given the stellar and staunch presence of Helen Keane and the Village Vanguard venue itself, it stands to reason that the recording here is as immaculate as the playing. The music contained in the six CDs of Turn Out the Stars: The Final Village Vanguard Recordings June 1980 demands to be preserved for posterity in exactly this splendid fashion.