Timothy Leary: Turn On, Tune In, Drop Out 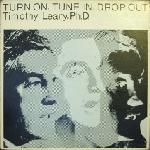 The historic Tune In, Turn On, Drop Out is not to be confused with the synonymously titled musical recording that infamous '60s "tune in, drop out" spokesperson Timothy Leary also did for ESP Disk. That disc consisted of narrated meditation by Leary mixed in with psychedelic rock music played on the veena, an Indian drone instrument, by Maryvonne Giercerz, along with guitarist Lars Eric and tablaist Richard Bond. That recording is rather a guided tour of mind-expanding meditation; this record, engineered by renowned classical pianist and engineering aficionado David Hancock, is purely spoken word. While it inevitably touches upon the acid trip (Professor Leary's core experiment), essentially in "The Taking of LSD," there is much more historic and informative material included. It was recorded at the legendary Castalia Foundation in Millbrook, near Poughkeepsie, New York—a property made available to Leary by Peggy, Bill and Tommy Hitchcock, heirs to the Mellon fortune.

Leary sets out to define his audience—not that this was necessary at that time—but the raison d'être for all his experiments was to change society in ways he thought would reform capitalist society. So he specifically addresses American youth 25 years or younger—certainly, he says, younger than 40 years old. Leary narrates in a flat, almost uniformly calm tone—not hypnotic—but definitely suggestive of meditation. "There is a Red Chimney" introduces Millbrook and weaves in symbology by drawing attention to the chimney stack which has an ancient Vishnu, the sustainer-of-life god. Part One sets the tone and scene for the Leary philosophy that believed the human mind could be constructively expanded by using certain hallucinogenic drugs.

Significantly, Leary, although armed with a Ph.D., considered himself a spiritual person, an appropriation he acquired after a mind-expanding trip to Mexico described with lucid ecstasy on "The Taking of LSD." However in using that flat tone in the narration, Leary ultimately ends up giving this track merely historical value. "Sensory Paradise" narrates a hilarious story of a policeman who was a marijuana advocate, inviting Leary to further seek mind expansion on his family's estate. "Elevation of Human Consciousness," sets up Leary's experiments to follow—a breakaway from the symbology of the tribal societal systems into a newer, mind-expanded new symbology of elevated human consciousness.

Part Two of the recording focuses on the new, post-LSD psychedelic world. "Tune In, Turn On, Drop Out," comes from a phrase coined by Leary when Marshall McLuhan told him that he should have a snappy slogan to promote LSD. The reality was—for Leary—more a question of breaking anatomical structures through mind expansion. Using his Spiritual Teacher avatar, Leary linked the elevation of the mind to altered states "Within the Temple of your Human Body." This is a remarkable document even today, long after the era when people seriously sought a chemically-aided expansion of the mind had come and gone.

Part One: A Message to Young People; Castalia Foundation; There