By HRAYR ATTARIAN
October 12, 2012
Sign in to view read count 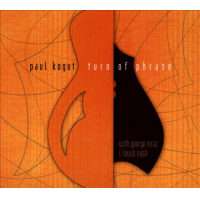 What makes Paul Kogut's album Turn of Phrase unique is not his virtuosity or talent, of which he has plenty, but the singular mix of tight thematic cohesiveness and expansive aesthetic language.

Kogut exhibits versatility without losing his own voice. On "Especially When It Rains," his cool, muscular jazzy guitar evolves into a blistering hot slurred sound with rock sensibilities. "Blue in Green" gets a 21st century makeover, with a stimulating deconstruction into soundscapes that harken at Miles Davis' In a Silent Way (Columbia, 1969), in homage to the late trumpeter's innovative spirit.

It does take the album a little bit to take off. Kogut's guitar lines, intelligently layered over a loosely swinging and laidback groove on the opening "So That Happened," are certainly enjoyable and interesting. They do, however, spill over to the seven-and-a-half minute long "About You" and, although the momentum does not slacken, the tune flirts just a tad with monotony.

The proceedings heat up fast with the funky "Know It? I Wrote It!." The electrifying vamps and R&B groove contrast well with Kogut's intellectual soloing. A profound soulfulness also spices the intricacy of his improvisations on the title track, creating a nocturnal and urbane mood. George Mraz's angular bass further enhances the feel of a happenin' night in the city.

Mraz is the perfect foil for the leader as his lyrical melodies are an extension of Kogut's musical ideas, their crisp, smart dialogues reminiscent of guitarist Jim Hall and bassist Ron Carter's classic records.

The driving force and third pillar of the ensemble is veteran drummer Lewis Nash. His complex percussive harmonies sublimely support his band mates and, on the standard "Days of Wine And Roses," blossom into an exhilarating call-and-response with Kogut's sparse lines. The opening bars of "Sister Cheryl" allow Nash to spotlight the full breadth of his skills in a mind-bending and complex polyphony that leads to Kogut's mellifluous and meandering tone.

Even with a minor flaw or two, Turn of Phrase is a compelling disc that simultaneously demonstrates both delightful idiosyncrasy and satisfying camaraderie.

So That Happened; About You; Know It? I Wrote It!; Body And Soul; Days Of Wine And Roses; Sister Cheryl; Wayne Shorter Solo Medley; Back-Woods Song/Ramblin'; Especially When It Rains; Turn of Phrase; Blue in Green.