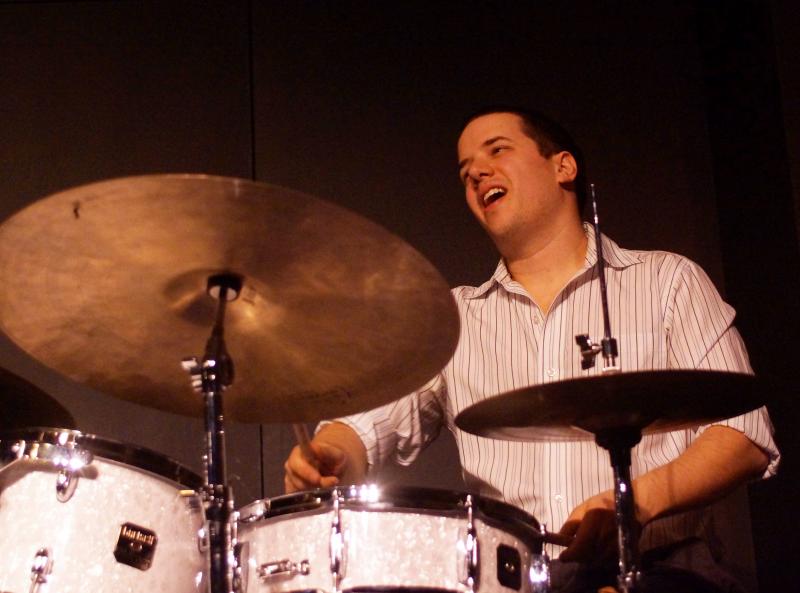 The concert highpoint for most was undoubtedly the ensemble’s entrancing performance of Cervini’s ingenious arrangement of “The Engulfed Cathedral,” Claude Debussy’s wistful piano étude. The leader’s majestic cymbal rolls, metronome-like chords by pianist

Fernie, a small ski resort of 5,000 surrounded some of the most spectacular Alpine scenery in the Pacific Northwest, might seem like the last place on earth where world class jazz talent would be presented on a regular basis. Tucked away in the southeastern corner of British Columbia just an hour's drive north of the U.S. border, the town's historic downtown proudly reflects the rugged frontier spirit of the prosperous coal mining city it once was. Outwardly there is little to suggest that this wide spot in the road in the rugged Canadian Rockies will become a jazz mecca anytime soon, but there are some promising signs.

The center of Fernie's cultural life is the old train depot, reborn in recent years as The Arts Station—a multipurpose facility where local residents can take a ceramics class, view the screening of an indie film, attend a locally-produced play, peruse the art exhibits, or take in an occasional concert. And, thanks to traditionally generous funding for the arts by the Canadian government, such remote locales often get to experience performances by top flight musicians.

In mid-March, the town's jazz community experienced an uncommon treat when the Toronto-based sextet Turboprop brought its engaging brand of free-flowing improvisation and delicately-structured orchestral concepts to The Art Station's cozy, 90-seat theater. The band is the latest project of Ernesto Cervini, an affable young drummer, arranger and composer who is rapidly becoming one of Canada's most highly regarded jazz talents. For nearly a decade, the drummer has performed and recorded with the MEM3 trio in the company of pianist Michael Cabe and bassist Marc Lau. His more recently formed quartet features tenor sax titan Joel Frahm, pianist Adrean Farrugia and bassist Daniel Loomis.

Today, the drummer is challenging his arranging instincts via Turboprop. Trombonist William Carn and woodwind artist Tara Davidson are the new voices, joining Frahm in the sextet's frontline while Cervini, Loomis and Farrugia compose the rhythm section.

For the Fernie date, tenor saxophonist Kelly Jefferson filled in admirably for Frahm, who was unavailable for the two week-long tour of western Canada. The group mainly focused on the repertoire featured on its self-titled debut release on New York City's Anzic Records label. In their live performance, as on the disc, Turboprop demonstrates a wide range of stylistic personas, extending from elegantly-crafted orchestrations that make the most out of the presence of three horns to rhythmically-crafty outings that catapult the horns into cacophonous crescendos.

Cervini's set-list for the Fernie audience included an eclectic roundup of original works and covers. "Unnecessary Mountain," a tune by the leader from the sextet's album, began with a light dusting of mood-setting pianistics by Farrugia and Cervini's subdued cymbal accents. Bassist Loomis' entrance underscored the tune's initially somber tone before the horns entered, opened up the form, and created surges of billowy energy. Charlie Parker's "Red Cross" was announced by off-kilter, up-tempo drum accents that paved the way for the horns, each biting off a small fragment of the bop anthem's tart melody line before the arrangement opened up for extended solos. Carn's "Try Again" shifted the group into yet another stylistic space, tapping a gritty and soulful sound reminiscent of vintage Jazz Crusaders. The trombonist's solo even took on some of the trademark characteristics of Wayne Henderson's burly sound.

Cervini's programming was audience-pleasing from beginning to end. Carn's elegant reading of Charlie Chaplin's "Smile" provided a familiar ballad to revel in, while "My Shining Hour," the Harold Arlen classic written for the soundtrack of the 1943 motion picture The Sky's The Limit, lived up to its flag-waving, show-stopper reputation, with Cervini's drums leading the charge and big band-style harmonies emanating from the horn section. Other highlights included the group's capricious, fun-loving reading of Keith Jarrett's "The Windup," which Cervini lauded for its "hoedown" qualities; "No Rain," the '90s era hit by Blind Melon; and the leader's "Marion Theresa," a reverential ballad composed to honor his grandmother.

The concert highpoint for most was undoubtedly the ensemble's entrancing performance of Cervini's ingenious arrangement of "The Engulfed Cathedral," Claude Debussy's wistful piano étude. The leader's majestic cymbal rolls, metronome-like chords by pianist Farrugia, sweetly-voiced woodwinds, and the symphony hall-purity of Carn's trombone foray all underscored the inherent formality of the work. Davidson and Jefferson then explored the piece's improvisational potential through increasingly hard-edged solo attacks. The performance was an audacious adventure and fittingly symbolized the fresh outlook and virtuosic musicianship Turboprop is becoming noted for. Tellingly, it was not the first time Cervini had performed in Fernie. There's little doubt that he'll be back.