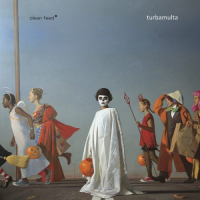 This Portuguese experimental outfit presents a conglomerate of faint sounds, striking colors and multilayered passages with textural backwashes and asymmetrical pulses. As a whole, the musicians use off-centered instrumentation, and they tender a diverse playbook that should goad a listener's concentration.

The quintet launches the festivities with "I," which is included in a three-part suite, "like a mast, an arm, a head." Here, they get off to a rather skittish start with eerie soundscapes and shadowy tonal swashes amid Eduardo Raon's textural cello parts and the artists' intertwining rhythmic progressions. But the second piece, "II," is built on an array of coalescing instrumentation and free-form overtones, featuring Joana Sa's gentle piano phrasings and colorful mosaics, peppered with polytonal breakouts and a sequence of abstracts via concurrent dialogues. The band also injects creaky movements with blotting treatments and neo-classicism of a different order.

This band occasionally summons the likes of legendary experimentalists John Cage and Harry Partch. They can be a rowdy mob at times, although they recede matters into calming and unhurried motifs, highlighted with gobs of detail, and fuse sedate song-forms with terse exchanges and active background movements.

The musicians' fluid modus operandi is concocted with fleeting exchanges, subtle dynamics and minimalist tendencies. It's one of those programs where you'll likely hear something different or previously undetected on subsequent spins: like a colorful dream with lots of moving parts.