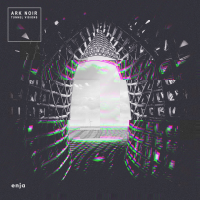 The minute-long opening track, "Intro To A Dystopian Society," whilst too brief to make a proper impact, does, nevertheless, clearly signpost the tenor of the ensuing forty four minutes, which might be construed, rather cynically, as a mash-up of Aphex Twin meets Magma. This glib summation is, of course, inaccurate since Ark Noir possesses its own very unique and laudable set of characteristics.

The debut album from this Munich-based group comes replete with electronic soundscapes, but crucially, although synthesizers, effects pedals and samples are noticeably in attendance, the improvisations are performed on real instruments. Moritz Stahl's plaintive tenor saxophone start to the electro-modal sojourn that is "A Dystopian Society" ill prepares the listener for the disconcertingly dramatic melee that explodes half-way through the ensuing title track. However this serves as a useful primer for the energetically busy and synth-rich "Praha" which occasionally delves into early instrumental Pink Floyd territory. "Drinkin' and Drivin'" is distinguished by saturnine spoken vocals and an urgent drumbeat from Marco Dufner.

"Arkomplex" is precisely that, a complex techno outing but imbued with a satisfyingly fluid keyboard solo before the piece modulates upwards into the tonal stratosphere before levelling out. "Weightless" is appropriately spacey, enriched by stereo percussive effects and elegant vocals from Hannah Weiss which, combined with the ethereal ensemble background, invites comparisons with the hypnotic dreaminess of the Cocteau Twins. The album concludes with "Tunnel Visions Revisited" played live; a pulsating smörgåsbord of sounds, handclaps and a compelling guitar solo from Tilman Branl. This sometimes lugubrious, often exciting astro-jazz is consistently and mesmerically appealing. Live, the quintet would surely be staggeringly dynamic but this first recording bodes extremely well for the future.