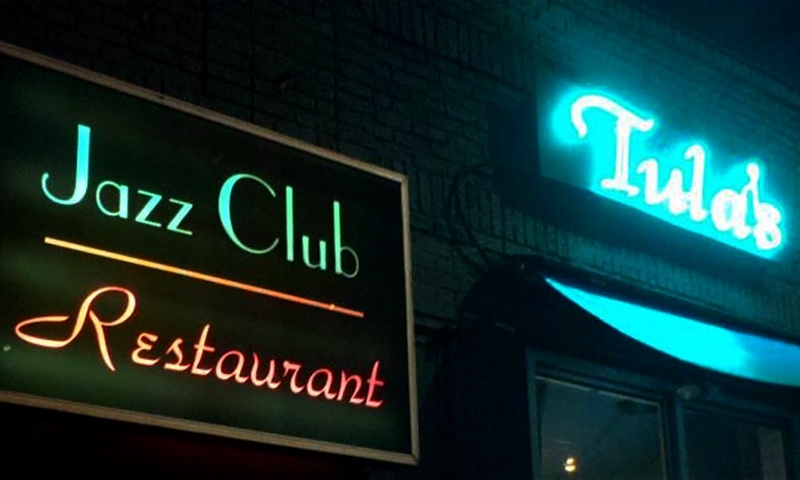 By PAUL RAUCH
September 7, 2016
Sign in to view read count
Life in the Pacific Northwest is hauntingly similar to jazz music itself, from that which is inward, deep in the recesses of our collective soul, to the outward expressionism as a ray of sunlight, an exaltation of joy, harmony expressed in the deep, deep blue of sentient life, and of our enlightened sky. High notes expressed in tall mountain peaks, deep tones expressed by deep, dark waters, all while Tahoma sits like Buddha, the near autumn clouds acting as a shroud, concealing mysteries yet to come.

Tula's Jazz Club sits between the iconic rock club, "The Crocodile,"and a row of classic dive bars in Seattle's Belltown neighborhood. Recently the building housing this stretch of night culture escaped the wrecking ball of constant and insufferable gentrification, due to the historic value of an attached ramshackle apartment building that is representative of Seattle architecture previous to the massive Denny Regrade project, which turned Denny Hill into a relatively flat pallet, from which a great city arose.

Stepping inside, leaving the noise and energy of the Belltown strip outside, the intimate room features tables directly adjacent to the stage on all sides, dim lighting bouncing off deep red walls, adorned with photographs depicting jazz history in the city, as well as the acknowledged masters. The crowd speaks quietly, if at all, respecting the music that resonates between the rough hewn wooden ceiling, the carpeted floors, and the tables adorned in white tablecloths. The between set hang is warm, friendly, engaging. The stage has hosted the Seattle jazz scene for nearly 23 years, a great run for any club, in any city. It has seen the best of the remarkably creative, innovative, and forward moving jazz musicians in the city, as well as a variety of international stars, in most cases interacting with players from the Seattle area.

The summer sun is now beginning to give way to autumn clouds, that which conceal us, in the restful slumber of the autumn and winter in Seattle, peaks of sunshine glistening between raindrops, the smell of salt water in the air, captured by the low, gray layer of clouds visiting us from Salish Sea, from the great Pacific. It is ultimately a time of reflection after the relentless spontaneity that is summer in Seattle, when all that can be achieved indoors is put aside to enjoy the greens, the blues, the immense clarity of beauty that is a northwest summer. These things can wait, until the next season, the next chorus begins, like a long blues into the night.

For jazz fans in Seattle, or for music fans of any genre for that matter, this means more time spent indoors, something that can change spontaneously, with a glimpse of sunshine, a mild breeze, the appearance of snow covered peaks appearing across the sound.

It has been said that the weather in Seattle begets self reflection and creativity. In the late fall and winter months, the climate is temperate, rarely freezing, a temperate flow off the sound, with light rain a common acquaintance. During the day, the coffee houses are full, and in the night, the same for the bars, dives, restaurants and clubs. We are hidden and concealed in a blanket of clouds that provides the time to create as an artist. Perhaps this explains the extraordinary amount of talent on the scene in Seattle. Internationally acclaimed artists like Thomas Marriott, Marc Seales, Greta Matassa, Bill Frisell, Chano Dominguez and Cuong Vu, to name just a few, are playing regularly around town. There is an accompanying jazz jam band/funk scene, a plethora of original and unique composition being expressed in small and large ensembles. A thriving network of avant-garde and experimental artists such as the Improvised Music Project are very active, and supported by the Tables & Chairs record label. The highly regarded independent label, Origin Records / OA2 Records has had a huge influence over 17 years in business.

Seattle has a long and colorful history of jazz, and the clubs that house the music. From prohibition, a paid off police force and indifferent city government created the Jackson St. jazz scene, as so eloquently described by Paul De Barros, in his book, Jackson St. After Hours, The Roots of Jazz in Seattle. More than 50 clubs populated the Jackson St. area in those days, including the Black and Tan (1922-1966), that saw the likes of Duke Ellington, Charlie Parker, Count Basie, Eubie Blake and Ray Charles take the stage. The Penthouse Club on First Avenue, though short lived (1962-1968), brought top tier artists to town, including Miles Davis, Bill Evans, Bill Cosby, Anita O'Day, The Montgomery Brothers and Ernestine Anderson. On the 30th of September, 1965, radio host Jim Wilke of KING radio, broadcast and recorded a performance of the John Coltrane Sextet, that was later released by Impulse records as John Coltrane Live in Seattle. The Penthouse was the first of what would be called a modern jazz club in the city.

Over the past 50 years, Seattle has seen many clubs come and go, most notably Parnell's in Pioneer Square, a small and comfortable venue that eventually became Ernestine's, a short lived venture by famed singer, Ernestine Anderson. But aside from the long run by the Black and Tan, Dimitriou's Jazz Alley has been the mainstay, starting as a small bistro in the University District in 1979, to the current, more lavish and sizeable Belltown site. The top names in jazz, too many to mention here, have graced the stage that has literally kept Seattle in the mix for attracting touring acts. But unlike major jazz clubs in cities such as New York, and Chicago, Jazz Alley does not feature artists who reside in its hometown, no matter their national standing. Artists as such in need of a similar sized venue perform at clubs such as the Triple Door downtown.

This weekend, Jazz Alley features Tower of Power, the legendary R&B powerhouse, who no doubt, will bring in a good crowd. The Triple Door has The Ukelele Road Show. And so, the jazz fan, those who reside here, and those visiting from out of town, are better advised to visit Tula's in Belltown, or the Royal Room in Columbia City.

The eclectic nature of the Royal Room is out in full force tonight, with legendary Santana drummer Michael Schrieve, a long time Seattle resident, releasing a new CD with his band, Spellbinder. The band features guitarist Danny Godinez, trumpeter Ray Larsen, who brings a '70s Miles feel to the band, Hammond B3 master Joe Doria, and bass phenom Farko Dosumov, all among Seattle's finest musicians.

Tula's calendar pushes the boundaries of this music we call jazz, but is truly the only club in Seattle dedicated to that sound, seven days a week, for over 22 years. Tonight, the room is full, energized, engaged, in on every note. Spanish pianist, Marina Albero is on stage, her music evoking images of her native Barcelona, her time spent in Cuba, she swings between jazz and flamenco forms freely. She is joined by third generation Seattle musician, stellar drummer D'Vonne Lewis, world percussion master Jeff Busch, and bassist Evan Flory Barnes, one of the most innovative and inspired voices in jazz today. Tomorrow evening will see the great jazz singer Greta Matassa on stage, continuing a long standing tradition at Tula's. You can be sure to see one of the finest singers in the country, and a singer with the reputation of letting the cats play-and so they shall, with pianist Darin Clendenin, bassist Clipper Anderson, and drummer Julian MacDonough laying it down for three sets.

Jazz music, jazz culture, cannot thrive without places where artists of the form can not only perform, but create and push the music forward. Musicians must be able to be paid a wage that represents the time and education, the everyday dedication that is their craft. Businesses that engage the music, must too, be able to earn a living while remaining dedicated to the music. Seattle can support jazz strongly, if venues are hip to being representative to the audience they are catering to. In short, music first venues and spaces, where the music can be performed to it's fullest, artists can be paid fairly, and a fan can regularly attend without spending a bundle. Most on the scene can envision another club, perhaps more informal, to add to the dinner type clubs such as Tula's and Jazz Alley. A place to attract a younger set, and where audiences of related forms could find common place. It is easy to envision growing the jazz audience in number and generation in this way.

For Tula's part, the club has been in the process of change since Jason Moore arrived in Seattle to manage the club. Founder and owner Mac Waldron had created a tradition of big bands at the Belltown night spot, Mr. Waldron being a veteran band leader in the U.S. Navy. Mr. Moore has been altering the weekly schedule more in favor of smaller groups, with the top players in Seattle performing night in, and night out. In addition, Tula's provides the true jazz club environment, in terms of listening etiquette.

Seattle will continue the great jazz tradition here under any and all circumstances, for sure. There is too much talent here, and much of it young, to believe otherwise. The question becomes will we find a path in today's rapidly changing music economy to continue the journey. Can musicians and venue operators find a way where both can thrive both artistically and economically? Perhaps some council with those who have managed to be in business for decades at a time invested in the music, who like the musicians, endeavor in an improvised and innovative form, is in order. In the end, the music continues its march forward.