By ROGER FARBEY
November 15, 2013
Sign in to view read count 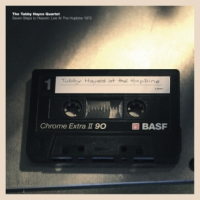 This set from the late saxophonist and flautist Tubby Hayes was extraordinary for several reasons. It featured along with his regular pianist of the time, Mike Pyne, two other virtuoso musicians, drummer Tony Oxley who repeatedly topped the Melody Maker British section jazz polls and the relatively less well known Daryl Runswick—primarily a classically trained musician bassist, composer, educator, author and producer who also played jazz bass superlatively. Runswick has featured on several albums by guitarist Ray Russell. Oxley's playing in this set was "straight" but he is most well-known for his free work alongside such renowned exponents as Derek Bailey and Cecil Taylor—but check out his timekeeping on the John McLaughlin's seminal 1969 album Extrapolation. Oxley and Runswick might have appeared with Hayes on stage at other times but this is the only known recording of this particular quartet. The three tracks here were recorded live in stereo in 1972 which makes this an even rarer album since Hayes' live work was rarely captured in anything other than monaural (there are a couple of excellent exceptions to this, but these were commercially recorded for the Fontana label in the early 1960s).

Sadly, this is a relatively short set but lovingly mastered onto vinyl (albeit accompanied by a free digital download code). Weighing in at well under forty minutes this is shorter than most vinyl LPs but is compensated for by the sheer quality of musicianship. In 1972, whilst Hayes was recovering from a serious illness and was tragically only months away from death, his playing is somewhat less ferocious than it had been at its peak. That said—and all hyperbole aside—Tubby Hayes even in "coasting" mode (and he never actually did that, always giving the full 100%) was able to evince a far more dynamic sound than most musicians can achieve in a lifetime.

The three compositions featured here are all standards but given a performing edge that is not usual in the context of a gig in a pub in the leafy London suburb of Wembley. Mike Pyne's extended piano solo opens side one with Morey and Churchill's "Someday My Prince Will Come" and gives way to Hayes' elegant flute solo which is at times redolent of Roland Kirk, but never a copy. Tony Oxley is heard in the background keeping a strict tempo interspersed with characteristic cymbal snapping. Last to be spotlighted is Daryl Runswick executing a delicate arco bass solo framed around the melody line. Track two of side one is whirlwind version of Victor Feldman and Miles Davis' "Seven Steps to Heaven" with Tubby Hayes introducing the theme on tenor saxophone. Two and a half minutes in and Tony Oxley gives a short but typically powerful drum solo, followed by a frenetic piano solo by Mike Pyne.

It's Mike Pyne's florid piano which again introduces the only track on side two, Schwartz and Dietz's lovely "Alone Together," Hayes' then introducing the theme followed by a solo that is typically Hayesian and yet manages to evoke a Coltrane-esque feel. Pyne solos again, displaying a quality and surety of style that only serves to emphasise the sense of loss experienced by many in the British jazz fraternity caused by his premature death in May 1995 aged only 55, though Hayes' death at 38 was equally poignant. Daryl Runswick then solos once more on arco bass with Oxley all the while keeping tempo in his inimitable surgically sharp fashion. Hayes again solos briefly before re-introducing the theme and bringing the proceedings to an all-too-short close but not before imparting some short flurries of wailing tenor that typified his very brief foray into a freer style. The only minor criticism of this superb album is that at just under 33 minutes it's short enough to induce in the audience a yearning for more, which is surely how everyone should leave the stage?

Someday My Prince Will Come; Seven Steps To Heaven; Alone Together.