By C. MICHAEL BAILEY
August 6, 2008
Sign in to view read count
The tuba in jazz is like the appendix. It is an evolutionary artifact that once played an integral role in the operation of the jazz orchestra but has largely fallen into disuse in favor of other instruments. Sure, it has surfaced at one time or another since the New Orleans days. Claude Thornhill employed one in his big band, prompting his arranger Gil Evans to used Bill Barber's tuba on Miles Davis' famous 1949 Nonet recordings collectively known as "The Birth of the Cool."

Jazz tuba players Jim Shearer and Jim Self bring two different approaches to their instruments. While doing that, the two do share many similarities. Both employ a harmonica (Billy Gibson with Shearer and Ron Kalina with Jim Self) and address challenging jazz standards with their unwieldy instruments, mostly successfully. Because of the nature of the tuba in jazz, the listener should be prepared for music from the early 20th century as the instrument lends well to such fare. Both discs are a treat, but in rather different ways. 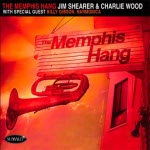 Memphis Hang is a breezy recital of 20th century music from early New Orleans to flinty bebop. The disc orbits Charlie Wood's informed, straight forward vocals that recall the fun in Wycliffe Gordon's singing. Wood doubles on some taste keyboard: a soulful Hammond B3 and some slick barrelhouse piano.

Thelonious Monk's "Well, You Needn't" is treated to a fun workout with Wood goofing with vocal style. "That Note Costs a Dollar," "Can't Take You Nowhere" and "Not While I've Been Drinkin'" are typical of this pair's light hearted approach to music. Light-hearted, but not lightweight: Wood's piano is exceptional and Shearer's tuba is appropriately bassy. 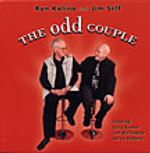 Where Memphis Hang is breezy and a bit tongue-in-cheek, The Odd Couple is mostly all business. While Billy Gibson's harmonica is more than competent on the former, Ron Kalina's is virtuosic on the latter and Jim Self displays a broader soloing palette than Shearer. Larry Koonse fills the rhythm requirement well and solos tastefully, and bassist Tom Warrington and veteran drummer Joe LaBarbara hold the ship together.

But this show belongs to Kalina and Self. The pair's song choice is piquant with Neil Hefti's theme to The Odd Couple and Michel Legrand's "You Must Believe in Spring." The two lay on the cool with Oliver Nelson's "Stolen Moments" and Antonio Carlos Jobim's "Someone to Light Up My Life." As odd as the tuba-harmonica combination may seem, Kalina and Self make it work.

And not only at slow tempi. They put their bebop shoes on for a pair of Charlie Parker chestnuts. "Confirmation" is fully punctuated by LaBarbara before the breath instruments duet and dance counterpoint with one another. Kalina displays a talent equal to that of Toots Thielemans and Hendrik Meurkens. "Donna Lee" closes this unusual recital making the listener believe that all is business as usual.

Tracks: No More Mr. Nice Guy; The Odd Couple; The Dolphin; Friends Again; Stolen Moments; To Monica; I'm All Smiles; Confirmation; Someone to Light Up My Life; You Must Believe in Spring; Donna Lee.