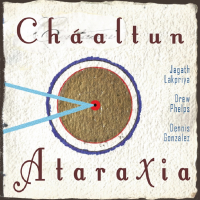 Dennis Gonzalez's trio, Ataraxia is comprised of trumpet (Gonzalez), bass (Drew Phelps), and percussion (Jagath Lakpriya), a mix of instruments that on the surface would alone suggest interesting music. And their double album, Ts'iibil Chaaltun, does not disappoint. There's a lot of desert in this music... large rocks that jut from the sand, dunes that stretch to the sunset, and a sense of vista.

There's also the dance. Listen to "Yarn" and how it spins a web of magic over Lakpriya's steady beat. In this cut, the bass girds the music with exploratory elements and Gonzalez plays a muted solo in the background that suggests Miles Davis at his coolest.

"Namesake" begins with a strong attack on the bass string by Phelps, and he is quickly joined by Lakpriya's steady tabla backbeat. Layered on top is a train-like horn solo by Gonzalez—and this evolves into a colorful expressiveness that has no small amount of Don Cherry-esque moments interspersed within its cascade. Phelps follows with his own solo that certainly echoes elements of Charlie Haden. Suddenly Gonzalez enters with a flamboyant up and down the register solo. And then that's followed by Lakpriya's playful retort. The track winds down with the trumpet's train horn refrain trailing into the distance.

Lakpriya has a very musical approach to the tuning of his tablas. The effect is most pronounced midway through the song "Parable." Gonzalez then enters with a very dreamlike solo, and the solo is backed by creative bass improvisation and tabla rhythms.

In some respects, Ts'iibil Chaaltun sounds like an homage to Old and New Dreams and Codona —though this by no means is a criticism of the album. Both groups produced a string of excellent albums from the mid-70s into the 80s (and for those who have not explored these albums, they're highly highly recommended). Nowhere is this influence more noticeable than in the track "Thoink," with its jagged dance-like rhythms and playful idioms.

It is in the subtle interplay of the three musicians that the genius of this music is most obvious. Gonzalez and his cohorts provide an invigorating yet subtle listening experience full of mystery and awe. Highly recommended.