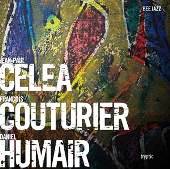 Musical blindfold tests (a la Downbeat Magazine) can be interesting, especially when the listener describes what he or she is hearing and why they think it is one particular musician/group or another. Reading about this procedure can many times provide insight into how people listen to jazz.

In this introductory section, the pianist's touch, the spaces between the notes, the phrasing, the harmonies chosen, the manner of interplay with the melodic bass line and the subtle percussion underneath it all sound not just like the playing of Stenson's trio on Serenity, but imply their musical personalities—it must be them.

That there is this and other Stensonian sections, that John Surman's beautiful "Canticle With Response" is played twice, that classical music is referenced (Benjamin Britten's "Rape of Lucretia," Gustave Mahler's "Adagietto of Symphony No. 5" and Ludwig Van Beethoven's "Allegretto of Symphony No. 7") all point to an ECM recording, on top of the physical sound of the record.

Furthermore, Courturier has recorded on ECM, both as a leader on the stunning Nostalghia - Song for Tarkovsky (ECM, 2007) and as a member of oudist Anouar Brahem's trio (see Le Voyage de Sahar (ECM, 2006)).

Aside from the question of why the music so closely at times echoes the ECM trio, it is wonderful chamber jazz. The notes in French say something about the fact that Couturier, Celea and Humair have known each other for a long time, but have never played together, making this session special. They go on to say that while there is no leader for the trio the musical connections were very close, and the camaraderie can be readily heard.

Some classical themes, such as the Beethoven, do not work in the same way as some pop themes, in that their structure is too strong and they are too well known to improvise on. However, the Mahler theme is shredded once it is presented, so Couturier and company are not consistent. The two Britten selections work very well because they have not become iconic, and the same can be said of Stanley Myers' "Cavatina" from The Deer Hunter. "Good Mood," by Joachim Kuhn is particularly effective, being full of tension and drama.

The two tracks by members of the group, "Instant," a group improvisation, and "Dramadore," by Humair give us the clearest view of who these players are since they feel the most immediate.

Tryptic, despite, or perhaps because of the varied program, will be much appreciated by ECM fans, and further recordings of this trio, perhaps purely improvising, would be most welcome.