By MICHAEL STEINMAN
June 7, 2009
Sign in to view read count 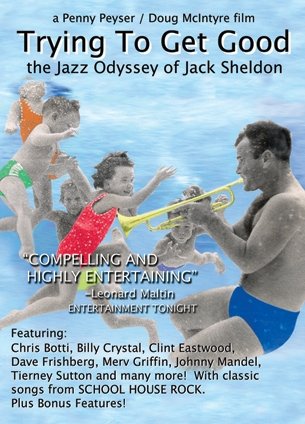 Born in 1931, the near-legendary West Coast jazzman Jack Sheldon—trumpeter, singer, comedian, actor—has played and recorded with Stan Kenton, Chet Baker, Dexter Gordon, Peggy Lee, Benny Goodman, Red Norvo, Bill Harris, Art Pepper, Anita O'Day and Tierney Sutton, as well as leading his own groups. His horn has been heard on movie soundtracks, he was featured on the Merv Griffin Show and had his own short-lived television series, Run, Buddy, Run. Sheldon has a large group of devoted friends: musicians (Ken Peplowski, Uan Rasey, Dave Frishberg, Bill Henderson, Terry Gibbs, Ross Tompkins) and famous non-musicians (James A. Baker, Billy Crystal, Clint Eastwood, Dom DeLuise, William Claxton) with anecdotes in profusion. Add to this Sheldon's irrepressible story-telling, his striving towards sobriety, dissatisfaction with his own playing (source of the film's title) and vulgar humor and anyone would assume that this would add up to a compelling film.

The performances included here show that Sheldon is a splendid mainstream trumpeter, lyrical and fleet-fingered. His singing is touching, his comedy lively. "Stardust," "The Joint is Jumpin,'" "Don't Blame Me," his own "(I'm My Own Worst) Enemy" and "It Had To Be You" are fine, moving jazz, even when the camera angles are unflattering. And what we learn of his insecurities and self-destructive behavior is revealing indeed.

But the film is often heavy-handed. When Sheldon mentions Carnegie Hall, we get a lengthy shot of it, as well as too much stock footage of California scenes. Worse, the documentary quickly feels like a celebrity roast with no enlivening sarcasm. Sheldon's friends ramble; only Frishberg, Peplowski and Crystal can tell a story. The documentary seems unedited but everything is offered in snippets, whether it's an anecdote or a song, as if someone thought the audience would be extremely impatient. Unfortunately, that prediction comes true. Only the most devoted Sheldon fanciers will be able to watch this in one sitting though there are rewarding segments throughout.