Joao Hasselberg: Truth Has To Be Given In Riddles 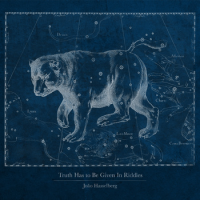 Truth Has To Be Given In Riddles, title of Portuguese bassist Joao Hasselberg's latest album, is reminiscent of a Zen koan, an illogical poem which aims to generate "great doubt" and propel a listener into satori, enlightenment.

The album opens in this spirit with a short track titled "Opening" featuring an enigmatic wordless vocal by Joana Espadinha.

On the next track, "Abraham's Doubt," it's all change, as trumpeter Diogo Duque lays down a very Spanish- sounding theme.

Complicating matters still further, Espadinha returns with a folksy, story-song, the lyrics of which she wrote herself, titled "Three Brothers In (sic) A Treasure Hunt." It's a guitar- based piece, the sort of thing Jackson Browne might have written.

All this will be very confusing for jazzers whose sonic knowledge of the Iberian Peninsula was defined by Miles Davis's classic 1960 recording of Sketches Of Spain (Columbia), based on the second movement of Rodrigo's "Concierto De Arunjez," which irreverent Anglophones have dubbed, "Concierto D'Orange Juice."

However, preconceptions surely exist (like orange juice) to be shaken up, as Hasselberg points out in discussing another influence on this album, a recent trip he made to Israel. He says this reminded him of the need to sometimes let go of dogma and "what we believe to be right." Are you listening, Mr Netanyahu?

But let's stay clear of Middle Eastern politics. The most interesting track is about a far shorter trip, from Hasselberg's home in Lisbon to the Spanish capital to pick up a new double bass. "En Madrid (To Madrid)" is a rocky, sometimes bluesy item, with Duque's trumpet again adding a quintessentially Spanish feel over a marching beat supplied by drummer Bruno Pedroso.

One way or another, there's a lot going on here for those prepared to listen. What's missing are melodies that—like all the best stories—have a beginning, a middle and an end. Unlike those of Rodrigo, Hasselberg's, don't really go anywhere.

Title: Truth Has To Be Given In Riddles | Year Released: 2014 | Record Label: Self Produced