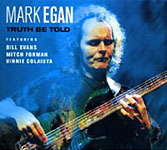 Mark Egan often provides subtle accompaniment, holding things together with his bass work and making other musicians look good in his role as a studio musician. The music on Truth Be Told shows off his extroverted side as he blazes through an assortment of funk/fusion tracks with some formidable sidemen along for the ride.

The quintet—Egan, drummer Vinnie Colaiuta, percussionist Roger Squitero, keyboardist Mitchel Forman and saxophonist Bill Evans (saxophone)—launches right into a funky strut on the album opener, "Frog Legs." Forman's little licks work their way into the musical gaps, serving as the grease that keeps all the parts moving, while Evans' slick and soulful soprano saxophone seems to energize the band. Evans and Egan move through the melody of "Gargoyle," a rhythmic ride with some tricky stops thrown in, and Squitero's hand drumming blends well with Colaiuta's kit work. Some otherworldly keyboard sounds show up on the title track and Forman takes over melodic duties at the outset, with Evans' tenor sounding playful at times as he dives into the track.

An earthy, loose-limbed feeling seems to come over the band as "Sea Saw" starts. Evans provides some mellow melody on soprano but the energy skyrockets when Colaiuta is in charge. He meddles with time, toying with metric modulation but never going over to the other side. Forman's keyboard flirts with Egan's bass on the opening of "Café Risque" and Colaiuta works some similar metric magic here. "Shadow Play" veers toward the smooth side, complete with wind chimes and rim clicks on the drums, with Egan delivering some of the disc's most melodious bass playing as something darker seems to lurk in the shadows.

"Blue Launch" provides a platform for Forman, Evans and Colaiuta to tear things up but the band really reaches fever pitch on "Rhyme Or Reason." Egan and Evans move together during their brisk melodic delivery and some excitable drums are heard behind them. The energy is evident from the first note and, eventually, the musical dam bursts. Evans—and, to a greater extent, Colaiuta—unleashes chops as a furious assault takes place. Things lighten up a bit for "Blue Rain," but the excitement returns on "Pepé," which start off in a funky place until Colaiuta moves to a caffeinated drum-n-bass groove and Forman provides a flurry of notes—the star on this particular piece.

"After Thought," the brief closing track, is the only thing that seems out of place. Two minutes of sitar-esque bass work, with gleaming, atmospheric sounds in the background, seem anti-climactic after Egan's bold and striking musical creations throughout Truth Be Told.