By JEFF WINBUSH
September 9, 2009
Sign in to view read count 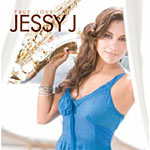 If half of life is just showing up and the other half is timing, then Jessica Spinella's timing is right on time. Smooth jazz is filled to the brim with saxophonists and while most of them are technically proficient, the sheer volume makes it difficult for a newcomer to stand out. Spinella, aka Jessy J brings more than just another pretty face to the party; her infusion of jazz with Latin rhythms gives her a foundation upon which to build.

True Love, Jessy J's third album and second major label release, bears the signs of a artist standing on the verge of a breakthrough and getting a big push by the record company.

Clocking in at just under an economical 40 minutes, True Love is lean and tight with no unnecessary fat or frills. It also contains no unexpected surprises, but showcases the playing of an increasingly confident Jessy J, asserting her own identity as she fuses Latin influences with jazz. There's a trade-off of spontaneity and improvisation in exchange for good groove, but the end result is rewarding enough so there's nothing about which to be disappointed.

"Tropical Rain," "Forever," and "True Love" are likable if not overly original slices of smoothed out goodness. "Morning of the Carnival" ("Manha De Carnaval") is targeted for the dance floor with its bounce-to-the-beat drum programming from Paul Brown and Gregg Karukas's synth bass and strings. Jessy J adds some breezy, sparse vocals that are sweetly affable if not as accomplished as her saxophone skills. She fares better when accompanied by backing harmonies on "Llegaste Tu" and "Baila!"

Jessy J's route to crafting an enduring career may not lie in following the beaten path of other smooth jazz saxophonists, but in continuing to consolidate Latin influences of "Llegaste Tu" and "Brazilian Dance." Pablo Aguirre's production seems to better serve Jessy J's vocal on "Llegaste Tu," the only song on which she doesn't play, and the graceful "Brazilian Dance," a sensuous duet between her soprano sax and Sergio Aranda's piano and vocals.

True Love ends up evenly divided between the skillful studio wizardry of half its songs and its impassioned, sultry Latin soul. It's a little too soon to chart the trajectory of Jessy J's career arc, but it might eventually fall somewhere between the efficient proficiency as the "hot chick" playing smooth sax and the expressive innovator busy setting trends instead of following them.