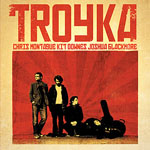 London band Troyka—an energetic organ, guitar and drums trio—has collected a bundle of enthusiastic reviews for its live performances. The group has been tipped by some to become the next big thing on the British scene, a new Polar Bear or Portico Quartet for 2009, and expectations around the debut album have been high. In that event, Troyka falls short of the blockbuster that's been hoped for. It reveals a virtuosic and enjoyably inclusive band—embracing rock, jazz and dance music in roughly equal quantities—but one which seems unsure whether to be funky or cerebral and which, by trying to be both, fails to be either.

The album's first two tracks—guitarist Chris Montague's "Tax Return" and "Clint"—spotlight the problem. "Tax Return" includes a gorgeously primal groove which, frustratingly, the band persists in meandering away from whenever things are getting interesting. "Clint" has some tasty, deep fried slide guitar but, once again, each time Montague sets up the groove, the band makes off elsewhere, to no apparent purpose other than to show it can. The brief "140" which follows, goes the same route, busily and self-consciously speeding up and slowing down. In a less enlightened age, this might be called cock-tease music. In 2009, let's just say it's irritatingly tricksy.

After organist Kit Downes' noodlingly inconsequential "Golden," the second half of the album is better. Downes' "Bear" is a spirited, abstract jam referencing free improv. Montague's "Born In The 80s" morphs pleasingly between the pretty and the turbulent, and his "Noonian Song" contains some inventive timbral shifts. Tempo and beat changes are features of these tunes too, but unlike on the earlier tracks, when the groove dies something of substance takes its place. If Troyka was to adopt these latter tracks as its paradigm, things might start cooking. Then again, if it got down and dirty on the grooves it's clearly got a line on, another sort of feast might result. Focus needs to be found before the next album.