By KURT GOTTSCHALK
December 17, 2006
Sign in to view read count 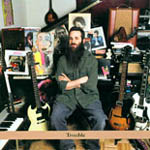 It's a story almost as old as rock itself: Bob Dylan, the pop poet laureate, can't sing or play guitar, but he sure can write lyrics. Never mind that he was one of the most evocative vocalists of the '60s, who could turn a phrase as brilliantly well with his mouth as he could his pen. History shows otherwise—it takes Joan Baez or the Byrds to make his songs into something, popular wisdom holds, and his talent lies off-mic.

Recent focus on Dylan the musical composer, then, is something of a surprise. The trio Jewels and Binoculars have been doing instrumental interpretations of Dylan since their first album in 2000. Now keyboardist Jamie Saft tries on a similar tack with a set of Dylan instrumentals played by his trio of bassist Greg Cohen and drummer Ben Perowsky.

Both groups tend to shy away from the iconic tracks, but Saft seems almost hell-bent on obscurity. There's only one song from the '60s, "Ballad of a Thin Man from Highway 61 Revisited, arguably the only classic album represented here as well. Two others come from great but less remembered '70s albums—"Living the Blues from 1970's Self Portrait and "Dirge from Planet Waves, released in 1974. The song selection seems something like a mix tape, made by an insistent obsessive out to prove that Dylan still matters.

Which of course is true. Dylan doesn't make bad records, just lesser ones. But whatever Saft's intention, culling primarily from later years sets a tone for the disc—or perhaps erases the tone set by the concept. Using lesser known material and without a soloist out front, the record escapes its subject matter and ends up being a pretty good piano jazz disc. On the few tracks where Saft switches to organ, Al Kooper's inspiration almost eclipses Dylan's.

Saft adds vocalists for two tracks, bringing the disc more obviously in Dylan's ring but not adding much to the overall project. Mike Patton gives "Ballad of a Thin Man an interesting, cartoon-ominous quality, but ultimately shows by negative example how good an interpreter of his own words Dylan is. Antony captures the strange quality, at once nasal and throaty, that the songwriter takes on when in country blues mode, but still (and admittedly it's a tall order) doesn't add to the original.

If Trouble is less than exciting as a Dylan tribute, however, it's still a great record, following the formula that makes great records great: talented musicians playing with passion. Although he has only rarely embraced it, Bob Dylan was born Jewish and at times has been observant. Perhaps another Great Jewish Music tribute is in the mix, one that would tickle more the reinterpreting of his songbook. But here, at least, is a loving homage.

What Was it You Wanted; Ballad of a Thin Man; Dignity; God Knows; Trouble; Dirge; Living the Blues; Disease of Conceit.