By EYAL HAREUVENI
January 9, 2013
Sign in to view read count 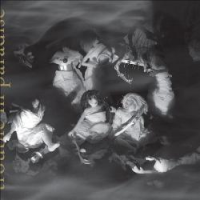 Phantom Orchard began as an experimental duo comprised of two innovative figures from the experimental New York downtown scene: Ikue Mori, who exchanged the drummer position in the No Wave band Dna for a unique exploration of electronic sounds; and Zeena Parkins, who has expanded the vocabulary of the harp in acoustic and electric contexts. The duo released its self-titled Mego debut in 2004 and, four years later, hosted other like-minded sonic explorers on their sophomore Orra (Tzadik, 2008).

That same year, this outfit was invited to perform at the New Jazz Meeting in Baden-Baden, Germany. Phantom Orchard was, therefore, expanded into an all-female Orchestra of seven experimental musicians, including violinist Sara Parkins and cellist Maggie Parkins, and the Jean Felix Mailloux duo that is also one-half of Spunk—singer Maja S.K. Ratkje and French hornist Hild Sophie Tafjord. Finally, Tzadik has released the recording of this that serendipitous meeting.

The expanded format blends organically otherworldly electronic blips and washes, vocal acrobatics, avant-garde acoustic explorations and weird beats into nuanced, open-ended orchestral textures. A reserved balance is kept between the colliding elements of electronic-enhanced sounds, string manipulations and the acoustic and electric percussive beats. These elements never strive for an overriding pattern or slide into a chaotic atmosphere, but gently develop a colorful and delicate equilibrium of mysterious tones. On "Red Blue and Green," the supportive interplay sketches a most beautiful cinematic soundscape, with Far Eastern-tinged, fragile and hypnotic sounding strings and liquid, electronic washes. "Sun Metal" begins as a lyrical chamber music interplay, patiently expanded into a dense texture with wordless, whispering vocals and electronic spasms.

Even on the most abstract pieces—"Face," "Inner Reflections" and "House for 7"—the clutter of plucked and rubbed strings, dreamy vocals, nervous electronic noises and disjointed percussive beats eventually gelsinto a cooperative and balanced, kaleidoscopic palettes of arresting sounds. Both stressing the Orcherstra's inventive, rhythmic approach, "Laughter in the Dark" features percussionist Shayna Dunkelman's chirping, resonating sounds, while "Trap" is defined by playful repetition.

The seven musicians of Phantom Orchard Orchestra offer a rare, exotic mystery tour. Hopefully, there will be more journeys of this kind.

Over the Gap; Red Blue and Green; Sun Metal; Face; Inner Reflection; House for 7; Laughter in the Dark; Trap.