Trombone Shorty & Orleans Avenue at the Space at Westbury 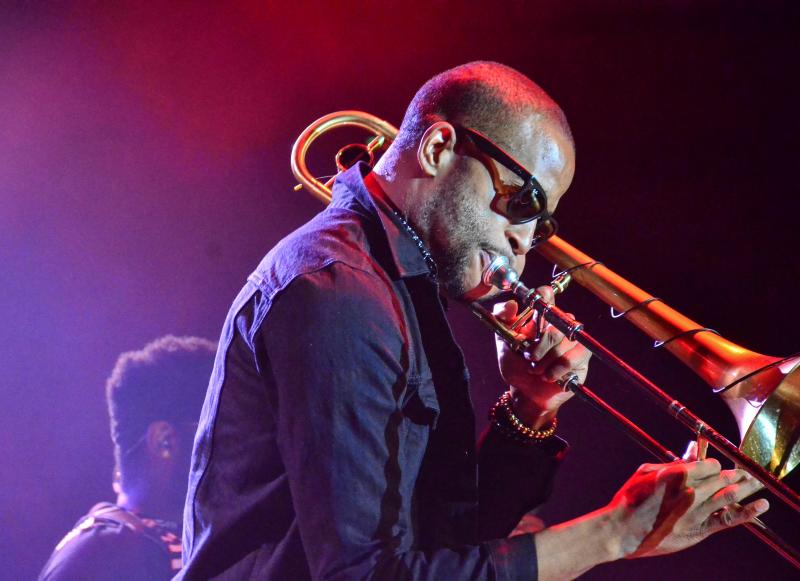 Troy "Trombone Shorty" Andrews is New Orleans musical royalty. His grandfather was R&B and blues singer Jessie Hill, who is known for the classic tune "Ooh Poo Pah Do." Shorty's older brother is trumpeter James Andrews (also known as "Satchmo of the Ghetto") with whom he performed "Ooh Poo Pah Doo" on the HBO series Tremé. James Andrews made his bones as a member of the Tremé Brass Band and New Birth Brass Band before leading his own group. His cousins are the late Travis Hill, also known as "Trumpet Black" who died from an infection while on tour in Tokyo on May 4, 2015 and trombonist Glen David Andrews, "The Tremé Prince," who played with New Birth and Lil' Rascals before venturing out on his own as an award-winning solo performer. Another cousin is Derek Tabb of the Grammy Award-winning Rebirth Brass Band. Yet another cousin, Glenn Hall, played with the Baby Boyz Brass Band. Other members of his extended family have made names for themselves and forged stellar musical careers.

Andrews was born in New Orleans and grew up in the Tremé neighborhood. At the tender age of four, the prodigy began playing trombone. After he turned five, his brother James decided he needed a nickname and christened him Trombone Shorty. By eight, he led his own band in parades and in bars. As a teenager, he was a member of Stooges Brass Band and played shows abroad with the Neville Brothers. By 2005, he was a featured performer in Lenny Kravitz' touring band. Since 2009, he has toured with his own band, Trombone Shorty & Orleans Avenue.

Though he is best known as a trombone and trumpet player, he is much more. Shorty is also proficient on drums, organ, and tuba. During the course of his career, Shorty has become a sort of musical chameleon. A few years ago, Shorty coined the term "supafunkrock" to describe the music he and his band make. His music defies genres. There are elements of jazz, rock, pop, funk, R&B, brass, gospel, rap and hip-hop—all rolled up into one distinctive sound.

During the course of his career, Shorty has recorded numerous albums including Trombone Shorty's Swingin' Gate (Louisiana Red Hot, 2002); The End of the Beginning (Treme, 2005); Orleans & Claiborne (Treme, 2005); Backatown (Verve Forecast, 2010); For True (Verve Forecast, 2011); Say That To Say This (Verve, 2013) and his latest, the recently released Parking Lot Symphony (Blue Note, 2017). In addition, through MunckMix, Shorty has released CDs of his New Orleans Jazz and Heritage Festival performances. On a lazy, misty Friday evening in mid-June, a fun and powerful set by the opening act, the New Breed Brass Band got the crowd in Westbury, NY's the Space into the mood. The audience members were ready to boogie and Trombone Shorty & Orleans Avenue brought its signature version of the New Orleans sound and celebratory atmosphere to the mid-sized venue. As soon as he took the stage, preceded by a few seconds by his band, the audience was mesmerized. Shorty asked, "Are you ready to party?" The crowd responded with enthusiastic applause as Shorty and his band (Pete Murano -guitar, Joey Peebles -drums, Mike Bass-Bailey -bass, Dan Oestreicher -baritone sax and BK Jackson -tenor sax) launched into "Backatown."

The venue was packed with a crowd that clearly knew what to expect—a high-energy performance loaded with excitement and showmanship. During "On The Way Down," the dance floor was flooded with audience members wearing New Orleans-themed clothing—Jazz Fest t-shirts, Saints jerseys, fleur de lis adorned baseball caps, Tipitinas t-shirts, and of course, Trombone Shorty t-shirts.

The faithful continued to sway and bop to the beat as the band delivered the heavily syncopated New Orleans brass 'n' roll on the impossibly catchy "Here Come The Girls." During "Long Weekend," Shorty presented members of the audience with Mardi Gras beads and to add an exclamation point to the song he added a "feel like funkin' it up" interlude. During "Tripped Out Slim" the stage was bathed in blue with strobe light adding a really cool vibe. Other highlights of the performance included: "One Night Only," "Where It At" (which was co-written by Better Than Ezra's Kevin Griffin), "Lose My Mind," an amazing, outrageous, brassified instrumental cover of Green Day's "Brain Stew" and the set closer, a cover of the Meters' "Ain't No Use."

The encore was a fantastic version of "Hurricane Season" during which the audience participated by shouting along with the band on the "Hey" asides that are interjected after each of the horn fills. When the song morphed into a brawny version of "When The Saints Go Marching In," the audience lost its collective mind and attempted to create an impromptu second-line.

The show was an absolute joy. As expected, the main focus was on Shorty, however each band member was given the opportunity to shine—Murano's fret-work was set to blistering yet tasty, Bailey's bass thumped and filled in nicely with the strong and steady backbeat provided by Peebles while Oestreicher and BK on saxophones, delivered and played perfectly off of Shorty's lead.