Trombone Shorty & Orleans Avenue at The Space at Westbury 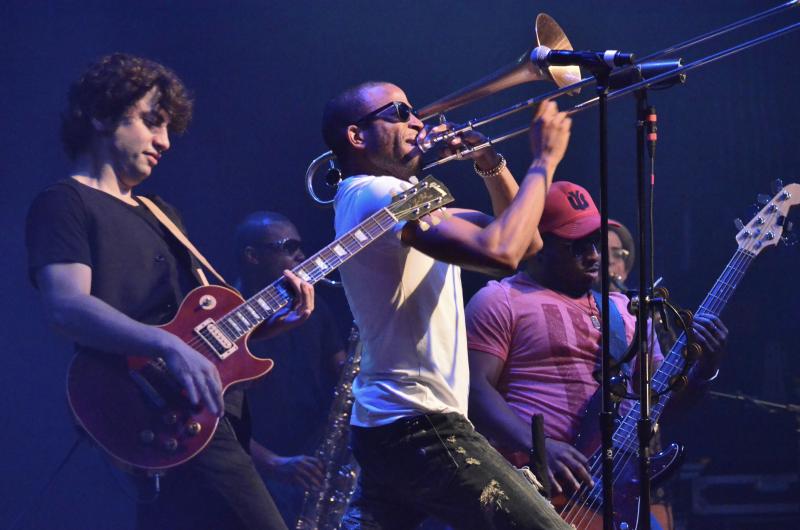 The new, young ambassador of the New Orleans sound stormed the stage at Westbury, NY's The Space on Friday, June 12. Troy "Trombone Shorty" Andrews is a member of one of New Orleans' most royal musical families. His grandfather was Jessie Hill, the R&B and blues artist most famous for the classic "Ooh Poo Pah Do." Hill's brother-in-law was singer and songwriter Lawrence "Prince La La" Nelson, whose father played with R&B pioneer Smiley Lewis and whose brother, Walter "Papoose" Nelson Jr., worked with Fats Domino and Professor Longhair. Shorty's older brother is trumpeter James Andrews (also known as "Satchmo of the Ghetto") with whom he performed "Ooh Poo Pah Doo" on the HBO series Tremé . James Andrews made his bones as a member of the Tremé Brass Band and New Birth Brass Band before leading his own group. His cousins are the late Travis Hill, also known as "Trumpet Black" who died from an infection while on tour in Tokyo on May 4, 2015 and trombonist Glen David Andrews, "The Tremé Prince," who played with New Birth and Lil' Rascals before venturing out on his own as an award-winning solo performer. Another cousin is Derek Tabb of the Grammy Award-winning Rebirth Brass Band. Still another cousin, Glenn Hall, played with the Baby Boyz Brass Band. All of their stars shine or shined brightly. Now, none shine more brightly than that of Trombone Shorty.

Shorty began playing trombone at age four and was given his nickname at the age of five by his brother James. He was born in New Orleans and grew up in the Tremé neighborhood. He played in brass band parades from the age of five and became a bandleader at six-years-old. As a teenager, Shorty recorded and performed as a member of the Stooges Brass Band. By 2005, he was a featured performer in Lenny Kravitz' touring band. Since 2009, he has toured with his own band, Trombone Shorty & Orleans Avenue.

The night's festivities began with a strong, short set by The Pimps of Joytime. The Brooklyn, NY and New Orleans, LA based funksters offered up their musical melange that mixed funk with the smooth sounds of soul, Latin, blues, pop, R&B and afrobeat. The crowd in the venue was predominantly there for Trombone Shorty. They were quickly won over as the band's infectious bass-heavy sound filled the venue. The group's set, which featured a number of tracks from its Jukestone Paradise (Write Home Records, 2015) CD as well as selections from the Wonderwheel Recordings releases Janxta Funk (2011), Funk Fixes and Remixes (2009) and High Steppin' (2007), lasted for less than an hour. It was more than enough time for the audience to stop milling about, take notice and bop their way across the dance floor to the infectious beats and grooves. And, the appreciative band appeared to be having just as much fun as the crowd. After surveying the clearly energized and delighted audience, lead singer/guitarist Brian J announced, "This is the best part of the night. This is the thing that makes it all worthwhile. Thank you for sharing this with us."

After a short intermission, Trombone Shorty and Orleans Avenue stormed the stage. The 29-year-old bandleader brought his own high energy version of brass 'n' roll to the adoring Westbury crowd. Clad in a white t-shirt and jeans, Shorty appeared relaxed and at ease. His set, on the other hand was anything but relaxed. It was incendiary. Along with his band (guitarist Pete Murano, baritone saxophonist Dan Oestreicher, tenor saxophonist BK Jackson, bassist Michael Ballard and drummer Joey Peebles), he burned through a fiery set of originals and choice covers.

Alternating back and forth between his horns (both trombone and trumpet) and vocals, the evening's highlights included: "The Craziest Things" from So True (Verve Forecast, 2011), the Allen Toussaint penned "On Your Way Down" from Backatown (Verve Forecast, 2010), a blistering and intense version of Lenny Kravitz' "Sistamamalover" as well as "Vieux Carre" from the 2013 Verve CD Say That To This (which was introduced with the simple statement of, "We're gonna go to the French Quarter now."). The audience was blown-away by a drop-your-jaw surprise version of Green Day's "Brain Stew" during which the lyrics were "sung" by the trumpet. "Do To Me," "Fire and Brimstone" and "Shortyville" had the crowd jumping around, movin' and groovin' and bopping to the beat almost as much as Shorty himself.

The main performance featured Shorty's musical buffet or perhaps it's better to call it his gumbo, a gumbo that includes complex layers of improvised jazz runs, rock, blues, funk, hip hop beats and other creative musical explorations. Depending upon who one listens to, either PT Barnum or Walt Disney said that the key to a true virtuoso performance is to "always leave them wanting more." This audience was clamoring for more. When the main set ended, the audience was at a fever pitch; they wanted more. They were loud, they were riled up and they were ready. They were not disappointed as the bad obliged and returned to give them a little more, a little something extra or what in New Orleans is called "lagniappe."

When the band returned for its encore, Shorty announced that it was "time for us all to go to the Mardi Gras." The cover of the New Orleans favorite "Go To The Mardi Gras" was truly mesmerizing. Though the Professor Longhair staple was written and originally recorded more than 50 years ago, Shorty and his band injected a life into the standard that made it sound like a brand new song. No easy feat, considering the number of displaced New Orleanians and New Orleans aficionados who not only made up the majority of the audience but sang along with a fervor not often heard outside of the Crescent City. When the band finally did leave the stage, the audience was hoping, praying and wishing that the show had not ended and would somehow magically continue. Several years ago, Shorty coined the term "supafunkrock" to describe the music he and his band make. It was never more evident than it was on this warm spring Friday evening.