Tristan Honsinger and Tobias Delius at the Jazzwerkstatt in Berlin

An in-store concert at Berlin's ultra smart Jazzwerkstatt café and record shop, just off the city's main shopping strip at Kurfürstendamm, provided the unlikely venue for the ongoing collaboration of cellist Tristan Honsinger and reedman Tobias Delius. Both are perhaps best known as members of the ICP Orchestra. Even though neither was born in the Netherlands (Honsinger is American, while Delius was born in Oxford, England, to an Argentinean father and a German mother), they are both strongly associated with the Dutch scene and seem to have found their spiritual home there. 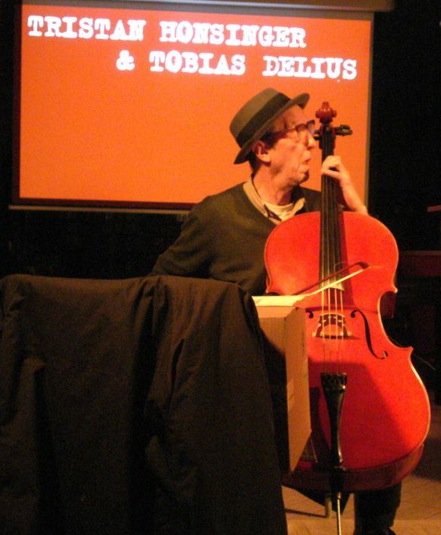 The musicians don't take themselves or even their audience entirely seriously, a trait of Dutch jazz. That outlook persists even though both now reside elsewhere; Delius is based in Berlin and Honsinger lives in Trieste, Italy. Another strong bond lies in their collaboration in Delius' quartet, which also includes bassist Joe Williamson and maverick drummer Han Bennink. The quartet has made three well-received recordings on the ICP label—The Heron (1998), Toby's Mloby(2000), and Pelikanismus (2001).

Theirs was a capricious music, an improvised outpouring full of quicksilver thinking, executed in casual counterpoint. Delius and Honsinger moved through a cavalcade of styles and gestures, their lines converging only to diverge once more. Each was by now so familiar with the other's style that the rapid-fire adjustments and recalibrations that transpired almost seemed preordained. There was very little a listener would call a solo; it was more that while one paused or prepared another instrument, the other carried on playing.

Seated with his cello, Honsinger needed an impromptu music stand constructed from a nearby cardboard box to allow him sight of a sheaf of charts at eye level. Though Honsinger has serious avant-garde credentials as part of the first generation of European improvisers, he worked from a more restricted palette tonight, bowing throughout with peerless technique, mostly within conventional registers. Of course, there were occasional breaks from the rhythmic patterns and romantic flourishes when the music turned to string scraping and squealing, but these passages largely served as transitions.

Delius demonstrated command of the full panoply of saxophone styles, whether exhaling breathy Ben Websterisms, crying with Albert Ayler-esque vibrato or resorting to controlled multiphonics and keypad popping, in the vein of John Butcher. Avoiding pastiche, the hornman marshaled whatever he needed for that moment into a false-fingered stream of mercurial invention. Delius proved as equally adept on clarinet as tenor saxophone; at one point, he growled on clarinet, put it down, then continued in exactly the same register on his tenor. Delius' facial expressions mirrored his musical thought, whether he was playing or not, revealing a stream of reactions, responses and contrasts to Honsinger's restless activity, which also extended to his body through funny little shakes, skips and starts.

Both men's sense of fun was brought to the fore, manifest in a theatrical presence exuding nervous energy—they peered owlishly at the audience and whooped, growled and mumbled along with their musical delivery. At times the sense of fun edged into the surreal, with Honsinger intermittently moved to down his instrument in favor of play acting or strings of verbal non-sequiturs. In this he was abetted by Delius, who manhandled chairs around the playing area one-handed while continuing his saxophonic barrage with the other, allowing his partner full scope for whatever physical means of communication took his fancy.

Almost the entire first set was a spontaneously improvised dialogue. Everything was absorbed into the performance in an artfully casual approach, where Delius whistled as he prepared a new reed for his tenor saxophone, so as to maintain the interplay with Honsinger. Such inclusiveness also extended to switching instruments, selecting sheets of music and even adjusting the music-holding capabilities of the cardboard box. Toward the end, Honsinger's fragmented rhythm evolved into some abstracted bluesy sawing. Gradually, the cellist started playing time, so Delius wandered across and looked over his shoulder. Then, in synch, they set out the long convoluted line of a piece entitled "Mouse March" to satisfyingly close the set on solid ground after the shifting sands of the previous 40 minutes.

For the next set, they made much more use of the charts, peering at scores together and moving in and out of composed elements as one. At one point, Honsinger played an intricate cello line, over which Delius layered a schmaltzy romantic waltz. Notwithstanding the inevitable drift into free improv territory, the waltz still managed to return in various guises, another example of the musicians' whimsy and prowess. Once a composition had been wrung out and exhausted, Delius tossed the chart onto the floor to make room for the next.

One memorable piece involved both men repeating single tones at varying tempos, which would suddenly cease without warning to be replaced by vocal interjections from Honsinger and bursts of improvisation before resuming the single-note sequence; this all happened without any discernible signals between the two. You needed great ears to be able to carry this sort of thing off so effortlessly. By the end, it felt like a privilege to bear witness to this meeting of two amazingly fertile musical minds. From the enthusiastic applause, the small but select audience seemed to agree.

All photos by John Sharpe