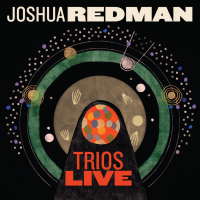 Upholding the legacy of his namesake, saxophonist Joshua Redman—son of the great Dewey Redman—has continued to develop as a leader in jazz since the 1990's. He's created a name as a consummate artist through rigorous work that's involved a previous directorship of SFJAZZ, constant tours and over a dozen recordings. At times criticized for not emulating his father's passion, recordings such as his 2013 jazz-with-strings project Walking Shadows (Nonesuch) resulted in a beautiful studio release that was at times unengaging. But make no mistake because Redman's definitely got the fire and burns hot as coals in Trios Live which captures the essence of his unbridled abilities as musician and performer.

It was recorded at two venues with different trios—Redman and drummer Gregory Hutchinson with bassist Matt Penman at New York City's Jazz Standard and bassist Reuben Rogers at Washington, DC's Blues Alley. Dedicated to the fans that've come out to hear Redman play over the years, these live performances in 2009 and 2013 possess a spirit that surpass many of his studio dates with its spontaneous urgency. Four originals and three covers including a persuasive interpretation of Led Zeppelin's "The Ocean."

Redman is in his element. The standard "Mack the Knife" bops, skips and twists as saxophone opens with a gorgeous solo full of breath and nuance. He engages the audience with talented showmanship who respond appreciatively to feverish runs, soft lines, playful banter and the music's improvised dialog. Yet this is not just about Redman as the other trio members more than hold their own with flawless timing, flexibility, and moments such as Hutchinson's gentle brush of cymbals in "Never Let Me Go" and synchronous fireworks with Redman in the 12 minute burner "Act Natural" as Reuben Rogers holds the line.

While Thelonious Monk's "Trinkle, Tinkle" is done justice it's the trio's cover by an iconic English rock band that steals the show when Led Zeppelin's "The Ocean" is transformed from power rock to hard groove. Redman improvises the guitar riff with punctuated spurts and runs fueled by Hutchinson's beats and Matt Penman's funky bass line. The musicians jam freely and the crowd at the Jazz Standard react with wild applause dispelling the myth that you can't party to jazz music.