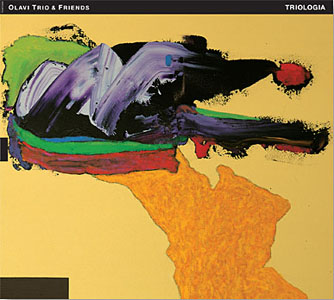 In his fine dissertation, "The Descriptive Grammar of the Ground—Almost Complete Poems" Brazilian poet Manoel de Barros wrote of the poetry that exists in everything, if one chooses to see it. The Beat poets, especially Allen Ginsberg, echoed this belief in emotive poetry. Similarly, Olavi and Friends—albeit in ways a lot more extreme than the Paul Winter Consort and more like Bill Laswell and friends—makes a similar claim for music. This often dissonant musical poetics has been expounded by the advocates of serialism, and in the 12-tonalism of Arnold Schoenberg. But the Olavi ensemble takes all this much further, much further than even a group such as the Association for the Advancement of Creative Musicians, AACM, in Chicago. Even if they never say a word about it, these tunes celebrate the sound and silence of life—things said and unsaid, with joy, humor and a deep sense of gratitude.

This is facilitated by a demanding choice of instruments. The trombone, for instance, is demanding because it can be played with conventional concepts of melody. But with expert hands and lips that control the embouchure, such as those of Jari Olavi Hongisto, it becomes an extension of the human voice. Thus it can cry and wail, utter smears and slurs and growls and grunts. It can curse and celebrate, and it can simply breathe. Olavi Hongisto becomes a channel for the song of the human body, if ever there was one. The songs on this album have titles because songs must have titles (and not every composer has the audacity, like Anthony Braxton, to extend crypto-grammatical titles to musical compositions).

Still, the Olavi trinity seems to make the conventional language of entitling work with their unconventional rearrangement of the sound of their musical topography. Then there are bird sounds and toy instruments, and these sing where the voice of the human diaspora, scattered as it is, meets with the invisible and universal intellect. Thus, invention in sound is returned to when it was a force of nature. No electronics; just manipulation of good, old-fashioned, acoustic-driven instruments, such as Teppo Olavi Hauta-Aho's double bass and Niilo Olavi Louhivuori's percussion.

This is not an experiment in sound. The music on this album goes way beyond that, to the imaginative mixing of metaphor and image, of silence and sound, and of the philosophies of Stoicism and Epicureanism. And how is it linked to music that was created in Africa, Europe, the Far East and America? The song—yes a song at last—called "Old Papa's Blues" does an amazing job of putting everything that the Olavi's play on Triologia in remarkable musical perspective; it has many telling moments where Olavi Trio and Friends connect with any and all music ever made.