By PHIL DIPIETRO
January 1, 2003
Sign in to view read count 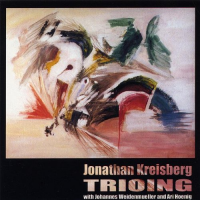 Some weird synergy was responsible for me perusing the current issue of Jazz Times while listening to guitarist Jonathan Kreisberg's astounding straight-ahead debut. An uncanny association occurred when I read Branford Marsalis's assertion, made during a blindfold test (while listening to a different player), that he would, "ban all guitar from jazz records" and "stick them in Foxwoods commercials, in perpetuity", precisely while being blindsided by Kreisberg's 90 second rendition of "Have You Met Miss Jones?" I sincerely doubt Branford's ability to stick his horn in his mouth (where something most assuredly belongs) and navigate the changes to this classic bop blowing vehicle with such a logically cohesive harmonic roadmap, in so recklessly precise, yet flawlessly swinging and effortlessly propulsive a manner, as Mr. Kreisberg.

But the latest ink-begetting Marsaldis brings up a salient point; that is, the non-trad stigma still attached to an instrument with as rich a tradition in jazz as any. To me, this all just makes Jonathan Kreisberg's story that much more remarkable. Kreisberg, at 30, has produced a recording that sounds as if it must have been crafted by a lifelong devotee of bop's archival pedagogy. But while he may now be a New York post-bop guitarist extending traditional jazz forms, it's only after having enjoyed a measure of notoriety as a Floridian prog-rocker and fusionist. He's performed extensively with proggers Third Wish, recorded with Wyscan, and in 1996 released his first debut, a fusion record. Only since 1998 has he been in New York delving more deeply into traditional forms.

How could this date, with bassist Johannes Weidenmueller and drummer Ari Hoenig, possibly be his first straight-ahead release? Possessing skills simply not found in nascent post-boppers, this guy's going to be the talk of fat-body guitar culture whenever they find out who he is. A true linemeister, he navigates the harmonic challenges of the program's standards with some highly individual, potent distillates of long-used and widely employed improvisational devices. These crop up constantly in his playing, but indulge me in checking out some. For example, the ascending arpeggio cycles 2 minutes, and again, 2:20 into "Sweet and Lovely", or 2 minutes into "Countdown", or 2:53 into "A Child is Born". "All of You" shows us how swing can be relaxed, yet razor-sharp and precision-filled. It also shows us some extensions of Martino's bag at 2:15 and 2:50! Make sure to rewind Jonathan's take on free-falling lightning chromaticism just preceding the two minute mark on "Old Devil Moon". He has a knack for making simple things sound strikingly exact, like the successive 3 note motifs in the 2 seconds following 2:52 of "Sorceror". Forward motion, or propulsion in the lines, occurs throughout, especially at 2:52 into "Sweet and Lovely", or 2:38 into "Countdown".

While your digging into "Countdown", make note of the sophisticated counterpoint used in the intro and after the solo, or the fluidly comped head. For Coltrane, "Countdown" was almost an exercise in following the contour of the composed progression with the improvised line-dig Kreisberg's modern extension of that.

Funny thing- as good as Kreisberg is, I'm not sure he is the best musician on the date! 29 year old Ari Hoenig is drumming's newest resourceful shining light, especially on bop forms-his drums dance and flirt with the soloist like few you'll hear. He manages to plug into and play with Kreisberg's lightning phraseology in a somehow unhurried manner. For more of this, check out Ari's inspired work on Jean-Michel Pilc's last two discs, or live with Mike Stern or Pat Martino. Dig his marvelous work on "Sorceror", especially the flare-ups from the 5 minute mark on out, or his sublime brushwork on Monk's "Ugly Beauty". "Sweet and Lovely" has Ari coaxing melody out of every available surface on the kit in subtle, comfortable ways. When given room, he knows how to take it down a notch and create his own sound level, with plenty of head space for him to tweak tonality out of the kit.

To Jonathan I offer the following career-accelerating idea. Just post the stunning 90 seconds of "Have you Met Miss Jones" on your website and have an agent book dates proving you can play it! It's just a magic 50 seconds of linearity framed on either end by contrapuntal madness.

And remember, like Branford Marsalis, Jonathan Kreisberg has, at this point in his career, elected to be an independent artist. Check him out on the web at Jonathankreisberg.com and buy his cd here .