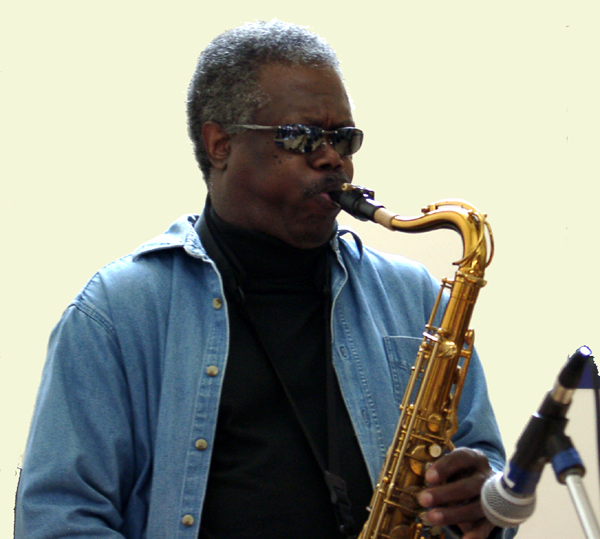 In continuation of the growing list of stellar performers who have appeared in Houston under the auspices of the Pauline Oliveros Foundation, Joe McPhee, Dominic Duval, and Jay Rosen, collectively known as Trio X, made a deep impression at this early summer concert at DiverseWorks, an acoustically friendly venue in the warehouse district of downtown Houston. McPhee was in town all week working with aspiring young students at MECA, the inner-city school dedicated to providing a foundation in the arts and improvised music. This public concert was the culmination of his Houston itinerary that had included a performance with the students the previous day.

McPhee is a romantic. He is compassionate, feeling, and loving, and all these attributes come through when he picks up any one of his many horns. He shows his emotions openly, and his feelings leap from his instrument and are transmitted directly into the heart of the listener. His music is inspired, personal, and highly original, but that is not to say it is docile or tranquil. With Trio X, McPhee does experiment with tender ballads such as "Try a Little Tenderness" and an occasional spiritual similar to material used with his Bluette project. On this night, he mixed his attack, developing gripping solos of heartfelt beauty and also taking the music to astounding levels of rousing intensity. Trio X is a true collective, and the igniting vibrations from Duval and Rosen spurred McPhee.

It is inspiring to watch Duval play the bass. He is able to make the instrument speak in whispers or to shout with gale-force strength. In all cases, his improvisations are constructed with extreme complexity and astounding intricacy. Magical music is the result of every endeavor. Duval combined arco and pizzicato techniques to eke sounds from the bass that would seem improbable, such as when he inserted a drumstick between the strings and bowed with intensity to establish aural splendor. He was not pleased with his instrument on this trip. His bass had not made the trip with him, but this did not prevent him from converting the borrowed bass into a messenger of deep, probing sounds that became the spirit of the concert. He intuitively harvested the right sequences that folded so naturally into the trio's music.

Rosen sat in the middle and was an astute listener of the vibrations flying around him. The concert was totally acoustic, which challenged Rosen to adopt softer tactics and to use subtleties to enhance the mystique. On a few occasions, he was able to expound in more dominant terms, but his call on this set was to shade and color the music in keeping with its depth of passion. Rosen used small percussion tools and ringing bell tones to complement the sounds. At one point, he adopted the brushes exclusively and added an enormous amount of ambiance and texture to the performance. You could see the strained tension in his face as he responded to what was happening. However, when the music elevated to levels of forcefulness, he generated the propelling wind to push the sails.

Trio X held a hushed crowd in the palm of its collective hands for two full-length sets. When the second set ended, there was a huge explosion of applause showing sincere respect for these three artists. It did not stop until an encore reflecting their noted formula for mixing delicacy and muscle was offered. This concert was creative improvised music at its apex.