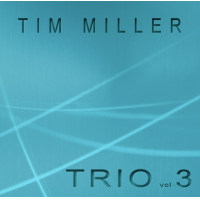 Best not to bury the lead.

Tim Miller's Trio Vol 3 sets a new high-water mark for the guitarist's output, an advance from and worthy successor to his last trio recording nearly a decade ago.

There, a potential pull-quote is out of the way...

Before returning to the review, something—what many newcomers to Mr. Miller's work might find to be the elephant in the room—begs addressing.

(Legato-philes and T.M. fans, feel free to skip ahead a few, I got this. View visual aid.)

Yes, it's a common reaction that many first-time (or cursory) listeners have and it's an understandable one. There's no denying that Tim Miller has chosen to embrace all things Holdsworth in a big way—it sort of hits one in the face—but it would be a serious mistake to reflexively dismiss him for it. For those so inclined, perseverance is strongly recommended, for it yields at least two truths:

1. Miller's virtually unrivaled technical and harmonic command of the daunting Holdsworth guitar lexicon is no trivial thing. This on its own it transcends mere imitation and merits serious attention.

2. Once acclimated, the extent to which Miller has imprinted his own identity on the Holdsworthian legacy comes into much bolder relief.

Or then perhaps a third:

3. If you don't care for/ "get" Allan Holdsworth, you may be listening to the wrong record.

All that said, Trio Vol 3 does shine and, though quite terse at 38 minutes long, is assuredly potent enough for fans to forgive the 9-year gap between it and its predecessor.

Out of the gate, Miller satisfies with his compositional, then improvisational prowess on "Lift." Yet only this far in, there are a couple of obvious reasons why "Trio" is in the title of this, and the bulk of his releases. One is that the format is undoubtedly the best showcase for Miller's spectacular abilities, tonal and technical. The open canvas afforded by the trio configuration highlights how far Miller can go to densely fill or subtly emphasize that space . And though there are some overdubs throughout, they are spare and judicious, always leaving the proceedings feeling organic.

Another reason is dynamic interplay. The rarified chemistry Miller enjoyed on his previous trio albums—with bassist Joshua Davis and the late Take Toriyama on drums—is miraculously equaled, perhaps even surpassed with the rebooted line up of bassist Sam Minaie and drummer Nate Wood. Far from over-composing, Miller wisely trusts in his cohorts' talents to shape and bolster the material. The results are undoubtedly elevated higher for it, as the many loosely-scripted areas on Trio Vol 3 bear out.

Minaie's importance to the synergy here—as anchor and with his blend and empathic support—cannot be overstated. In context, his largely subdural bass percolations come to the fore only occasionally but these surfacings reveal not only a talented player, but one with a restraint/maturity that belies his years. Invaluable too is the obvious telepathy he has developed with Wood from working together in Tigran Hamasyan's rhythm sections.

As is the case on so many other recent recordings, Nate Wood's presence again asserts itself as an inspirational force on this one as well. His artful framing of Miller's compositions—including the shrewd support of the syncopations in "Stowed," and the cavernous swing of "New York" are a delight to absorb. With repeated listenings of Trio Vol 3, it begins to sink in that part of Wood's magic lies in his ability to create exciting rhythmic frameworks worthy in complexity of, say, a Vinnie Colaiuta—more through implication than full delineation. And despite recent, ever-mounting evidence of Wood being a talented multi-instrumentalist, (or perhaps because of it), he continues to solidify his reputation as one of the premier drummers of his generation.

As one would expect however, Tim Miller is the undeniable star of this recording and rightfully so. His performing and composing abilities have never seemed sharper than on the music in this collection. Guitar centrists may surely focus on the aptly-titled "Roller Coaster" and the majestic tour-de-force "Rb," if for no other reason than their displays of jaw-dropping aplomb, but perhaps the most satisfying aspect of Trio Vol 3 is how Miller balances that prowess with eloquence. This stands out over the whole of the album but nowhere more prominently than on the shimmering and introspective "Breathe."

On a purely sensory level, Trio Vol 3 shines as well. As on his previous trio albums, Miller achieves his palette of signature of tones, from chiming to silken, woody to molten, in part with a dual recording technique, simultaneously miking the acoustic sound of his chambered Canton guitar in tandem with its amplified electric signal. (For more on this process, see Phil DiPietro's review of Trio Vol 2). The shifting emphasis of the two signals offers tonal results to marvel at, with contrasting timbres sometimes dominating different parts of the same note. The sheer range of sounds on "Rb" alone yield a primer on modern guitar tone. Kudos should also be given here to Miller's returning studio cohort (and former Holdsworth keyboardist) Steve Hunt for reprising engineering and mastering duties. He has truly rendered a clean yet luxuriant recording.

Trio Vol 3 reminds that Miller does indeed possess one of the few skill sets that can not only grab the Holdsworthian bull by the horns and brand it with his own mark, but also give it a thrilling ride into new territory.