By PHIL DIPIETRO
September 4, 2005
Sign in to view read count 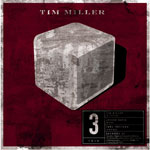 Tim Miller's third indie effort stands out by manifesting his influences as an aural whole. Compositionally, the freedom and openness in the music reflects the deep influence of Keith Jarrett, while sonically, the air-infused yet electric guitar sound dances with bass and drums mixed in a pastoral acoustic style. Even with headphones, the listener hears the trio of instruments entwined in the air, coupled by intense playing and musicianship.

From the perspective of guitar-related influences we hear the chordal inspiration of a fellow Bostonian, voicing-god Mick Goodrick. Linearity is Miller's calling card, seamlessly melding Allan Holdsworth's 21st Century legato technique with a non-guitar-centric, truly jazz vocabulary and phraseology, with notes percussing from the fretboard in pianistic fashion.

Another facet that takes Trio up a notch is the particular attention paid to tone and articulation on the high end. Miller devoted requisite consideration and time to sonics, and the dividends are sumptuous. An advocate of the ergonomically correct Klein axes, Miller's performance on "Untied sounds as if he's playing two of them at once, electric for the atmospheric chords of the intro and acoustic for the quick sixteenth-note turn-backs found on high, doubled by the drums. Take Toriyama's tone is apart from the more athletic norms of the "fusion realm, with more of the room than the kit in the mix. His use of slackened snare, coupled with bassist Josh Davis' booming upright sound, is especially effective on this track.

Miller employs a super-thick tone for his solo, alternating bop-legato mastery with sax-like repeated figures that belie the layout of the fretboard. Miller can lay into a rock'n'roll repeating hyperspeed four-note figure akin to traditional Hendrix or Page twelfth-fret pentatonics, but in the middle of the neck, using four notes at spread intervals of the harmony-of-the moment, something more out of Mike Brecker's vocabulary.

While the recording weighs in at the forty-minute mark, there's much to be said for concentration and self-editing. "Sparkle is ninety seconds of inspired melodic riffing against Toriyama's percussion arsenal and will alone reward consecutive listening surpassing the total of the disc's real time. It would be an interesting musical exercise to map out here where each of Miller's melodic phrases begins or ends, or to pick the midpoint of each. I am sure each roadmap would in turn comprise alternate songs. Similarly, the three minutes of "MG, dedicated to mentor and Berklee fellowman Goodrick, forge a successful marriage of modern rock balladry with jazz.

"Straight Lines is the composition of the set, a mid-tempo cut smoldering with the passion and memorable melody usually reserved for ballads, especially in Miller's opening solo salvo. The two "Density compositions, using minimal themes fashioned from rhythmic chordal materials growing out of and into weaving strands of single-note improvisation, reveal substantial rewards unearthed by exploring repetition as a means of mining new melodic and improvisational territory.

Nothing should stand between this one getting heard and Miller's justifiably meteoric ascension on the worldwide guitar-watchers org-chart.