By BUDD KOPMAN
January 8, 2008
Sign in to view read count 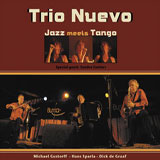 Saxophonist Dick de Graaf's restless and inquisitive musical imagination is on display once more with the enchanting Trio Nuevo - Jazz Meets Tango. The album's (and group's) title is a direct reference to Astor Piazzolla (b. March 11, 1921, d. July 4, 1992) and the music he created: Tango Nuevo.

Piazzolla himself was constantly searching for new ways to express himself musically, starting out playing traditional Argentinean tango on the bandoneon but dropping it entirely before he was thirty. He went to Paris in 1954 to study classical composition with Nadia Boulanger, who famously told him, "Astor, your classical pieces are well written, but the true Piazzolla is here, never leave it behind." After that he returned to the bandoneon and began to merge his desire to create sophisticated music with the passion of the tango, ultimately creating the music which has influenced the entire musical world.

If you are familiar with Piazzolla's music, you find the essence of the fire of the tango maintained, as well as his unique mixture of that fire with a classical imagination. However, while the trio maintains the connection to Piazzolla, the personalities of the musicians come through very clearly. Although Piazzolla's favorite instrumentation was a quintet of bandoneon, violin, bass, piano and electric guitar—making the trio sound a bit thin in comparison—the players' love of this music overcomes this, and eventually sounds quite natural.

The surprise of Trio Nuevo is vocalist Sandra Coelers who sings (and speaks) four tunes ("Chiquilin de Bachin," " Melodia de Arrabal," "Balada para un Loco" and "Milonga de Jacinto Chiclana") with such a theatrical presence as to almost steal the record. She is a pure joy to listen to, allowing us to hear the emotions in the songs without even understanding Spanish.

The music and arrangements stand on their own and the fusion that is Piazzolla's music is both treated reverently and created anew by these wonderful musicians. Trio Nuevo has a cumulative affect on the listener, and by its end you might think you are in Buenos Aires.

Visit Trio Nuevo on the web.