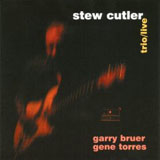 Guitarist Stew Cutler is a man of ideas. He shapes them in various forms and brings in a wide range of styles. With his compositions fanning a broad base, he can indulge in the many sides his music takes from jazz and blues to avant-garde. The last shows his most adventurous side.

Cutler shows his considerable technique on this live recording from November, 2004. The trio begins with "Left Behind and "Mourning Dance. Both are free of structure and flow, leaving Cutler to indulge. However, he is more interested in creating sound rather than finding a cohesive flow. As a result, the music fails to communicate. Being a live recording, and presuming this comes in the order it was played, the choice is strange.

Then comes the change, but only for a while. "Spaghetti Western is a ringing tune. Cutler gets into a dialogue with bassist Gene Torres as drummer Garry Bruer adds a lithe rhythm. The exchange of ideas and the trading of lines between Cutler and Torres is exemplary, the interplay filled with intuition and empathy. "East River Delta is an up-tempo blues that has Cutler bending his strings, playing with a thick luminosity and driving the pulse in tandem with Bruer. He turns in a pleasant surprise when he goes on to replicate the sound of the sitar.

Cutler shows yet another side on the country tune "Yippie-Tai-Yi-Yo. The melody is catchy, the playing is unhurried with a sweet air, and the trio is in lockstep.

However, the selections are inconsistent and do not sustain interest. The pith is often missing and so is the heart.