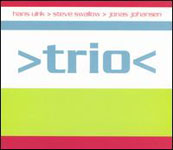 The cursory documentation included with this disc doesn’t offer much as to the origins of this trio. On the surface they have the suspicious makings of a pick-up tour band, but the tight confluence of the music tells a different story. Steve Swallow’s surname will likely garner the greatest degree of familiarity, at least in the eyes American listeners. But from the opening notes of the curiously titled “Self Exiting Circuit” it’s clear that the two Danes who round out the ranks can hold their own in such prestigious company. Hans Ulrik’s tenor tone is tough and hard-bitten, and he blows strapping lines against the corpulent groove forwarded on Swallow’s febrile strings. Jonas Johansen stamps out a confident striding beat around his partners, moving smoothly from snare to cymbals and back again before a liquid solo from the bassist that makes use of his instrument’s fast action versatility.

Ulrik’s “Brother J” rolls out on another one of Swallow’s gargantuan grooves. Hunkering down, the tenorist reels out a tensile stream of cerulean-hued phrases against the wide-girthed support. Swallow pops his strings in a percolating display of scalar funk laced with Johansen’s whispering brushwork. The pungent amplified grease dripping from his frets is nearly palatable. A tumbling tattoo of traps play carries the tune out on Ulrik’s moody tenor cries. Twisting the dials on his amp and tuning up to a guitar-like pitch for the soporifically flavored “I Fall Asleep to Easily,” Swallow once again capitalizes on the chameleonic properties of his thunder broom. Ulrik lays the vibrato on thick in lullaby fashion and Johansen once again displays his prowess on whisking brushes.

With “After You’ve Gone” the trio shows they can play things relatively straight, even at amped up-tempo. Racing across the changes, the three shave off energy to spare and it’s a thrilling chase to see who will finish first. Johansen edges ahead as the marginal victor in a rock-inflected sortie, making use of the majority of his kit. Odd rhythmic suspensions and a hypnotic bass ostinato fuel “Exactly Backward,” while hand percussion beats jockey with the curiously restrained soprano of Ulrik on “The Girl With the Hair.” The only minor misfire crops up with “It’s Blue,” a lazy, laidback groover that doesn’t go much of anywhere, but still benefits from the solid thrust of Swallow’s strummed bass.


This is a power trio in the most subversive sense of that overworked descriptor. Rather than go for the easy kill, these three prefer to lull listeners into a false sense of safety, only to strike with disabling efficiency when least expected. It’s a tactic guaranteed to bring grins to those who like their music imbued with a disorienting edge.

Most of the cuts clock in with terse running times and the economy only adds to the session’s driving momentum. Tracks fly by so succinctly that an urge to cue things up from the beginning sets in soon after the program ends. Whether this trio is to be a regular working unit or one-shot project remains inconclusive. The substantive nature of the resulting music suggests that the former condition would make far more sense. With any luck these three will find their way back into the studio or onto concert stages soon.

Stunt on the web: http://www.sundance.dk/website/stunt.htm