By GLENN ASTARITA
November 26, 2017
Sign in to view read count 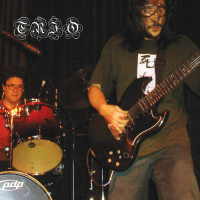 If you ever wondered what an angst-ridden, scaled back version of Sonic Youth would sound like if the musicians were overdosing on energy drinks, then the core duo of Say Bok Gwai may represent that notion rather mightily, and then some. Based in San Francisco, the unit is billed as a Chinese American hardcore rock band. Noted as a double EP, and the first time they've employed a bassist (Josh Martin), the musicians cover the social condition via an extremely fast-paced gait, brimming with false-endings, split-second time changes, moving walls of sound, bone-shattering licks and a whole lot of loud sound-shapng escapades. Essentially, all hell breaks loose in a rather controlled formulation, akin to an action-paced car chase scene from Fast & Furious, and so on. It's not a jumbled mess, however. Besides hyper-mode punk, doom metal, stoner rock and other stylizations, the band's tightly coordinated modus operandi adds to the thrills-a-minute performances amid these transitory-like works that interconnect throughout.

Buckle your seatbelts then hit the play button for "Vegan Death March," which is a piece framed on classic death metal, abetted by guitarist Alex Yeung's droning crunch chords and wailing vocals, as the trio subsequently ventures into a turbo-punk groove. And tap your feet to the chugging rocker "Saan Hou," or enjoy a bit of bloodletting during "Kiss the Goat," where thrash rock riffs atop a turbulent pulse are treated by howling background vocals. But Yeung picks up the alto sax on the avant-garde jazz rocker "Gambaru," that morphs into an ethereal mid-section, peppered by idiosyncratic, oddball pop metrics and free style guitar phrasings. Even though the album clocks in at 26:21, it whizzes by in expeditious fashion due to the band's aggressive and hardnosed methodology, largely executed within close proximity to the speed of light.