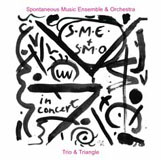 Given the quantity of SME music released by Emanem, cynics might be thinking that quality control must have slipped, that the barrel is being scraped. Miraculously, nothing could be further from the truth. Each new release adds to the body of work available, shedding further light on the exploits of John Stevens' multifaceted ensemble, and putting the whole into sharper perspective. Trio & Triangle is no exception, matching the high standard set by other recent SME releases.

The first three tracks here were recorded in 1981, and released on LP as SME + SMO In Concert (SFA, 1982). The trio of the title is the version of SME that existed from 1978 to 1992—Stevens plus Nigel Coombes on violin and Roger Smith on guitar. "Reciprocal" focuses on that trio; the piece is fifteen minutes of intensely concentrated simultaneous improvisation, performed at very low volume. The intensity of the music means that the evident concentration of the players is matched by that required of the listener, but the music richly repays said listener's investment of time. For "Triangle," Stevens' methodology for the piece was that "the three musicians are seated in a triangle, each listening and responding to the other two as a stereo pair, and using their own instrument somewhat unconsciously as a sound piece for the other two to listen to." The version of "Triangle" here and "Static" extend the same method to a triangle of triangles, involving nine musicians (hence, SMO rather than SME). For a grouping of this size, the results are extraordinary, displaying none of the incoherent chatter that too often typifies such large improvising ensembles; instead, with no obvious leadership, the music ebbs & flows and swirls & eddies in an organic fashion, with rises and falls in pitch and volume occurring as naturally as breathing.

The two unreleased tracks that have been added to the original LP again feature the trio. "Newcastle 78A & 78B" were salvaged from a distorted cassette tape and have more than once been rejected as too poor for release. The tracks, however, have been cleaned up surprisingly well and the sound quality is very acceptable. On the other hand, the music can only be described as stunningly good. All three players are in top form, both individually and collectively. In contrast to the preceding tracks, this music is far more dramatic and garrulous. Frequently egged on by Stevens, Coombes, in particular, repeatedly steals the limelight. All three players sound as if they are having a great time. More!