By DAVID ADLER
December 1, 2000
Sign in to view read count 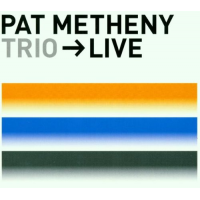 This two-disc release documents performances from the 2000 world tour of the Pat Metheny Trio, featuring Larry Grenadier on bass and Bill Stewart on drums. Like the trio's spectacular studio release from earlier this year, the live album draws on material that spans Metheny's career. The opener takes us back to the first track on Metheny's first record, "Bright Size Life." Grenadier's upright puts a new spin on a tune first played by the late Jaco Pastorius. "Unity Village," which Metheny played as solo piece on Bright Size Life, is heard here with the full trio. Listening to the harmonic nuances in this beautiful tune, one is reminded how developed Metheny's compositional talents were way back in 1976.

Leaping ahead about 15 years, Metheny puts "Question and Answer" through its paces for nearly 20 minutes, switching to guitar synth for the extended outro. "All the Things You Are" and "Giant Steps" are straight-up acoustic jazz, while "Faith Healer" is one of Metheny's scorching avant-metal synth experiments. "Counting Texas," the finale, finds Metheny sounding like a mad banjo player on fretless 12-string guitar. "Into the Dream," which Metheny played with Jim Hall on that duo's 1999 Telarc release, features the harp-like sounds of the 42-string guitar.

Metheny's mainstream work gains a certain edge in this stripped-down setting. The Metheny Group tunes "James" and "So May It Secretly Begin" are reborn as burning trio improvisations. "Night Turns Into Day" is a stunning acoustic feature that highlights Metheny's absolute mastery of tone production. And remember "The Bat" from 80/81 ? It's back, as a sweetly cascading trio ballad.

When Metheny lets loose on his mid-tempo blues "Soul Cowboy," things truly get scary. At times one isn't even sure what instrument he's playing. Certainly such phrases can't be produced on a guitar, can they? Particularly on the rounds of trading with Bill Stewart toward the end of the tune, Metheny's chops and rhythmic trickery seem to enter another realm, one that should send hordes of mortal guitarists back to the woodshed. It's fitting, somehow, that on this relatively straight-ahead record, the sparks really begin to fly when the blues are being played.

Along with the trio's earlier studio effort, these discs showcase Metheny and his music in perhaps the most comprehensive and satisfying manner to date. Just strip away all the crossover trappings and we see Metheny for what he really is: the meanest mutha on two legs.

Track Listing: CD1: Bright Size Life; Question And Answer; Giant Steps; Into The Dream; So May It Secretly Begin; The Bat; All The Things You Are. CD2: James; Unity Village; Soul Cowboy; Night Turns Into Day; Faith Healer; Counting Texas.