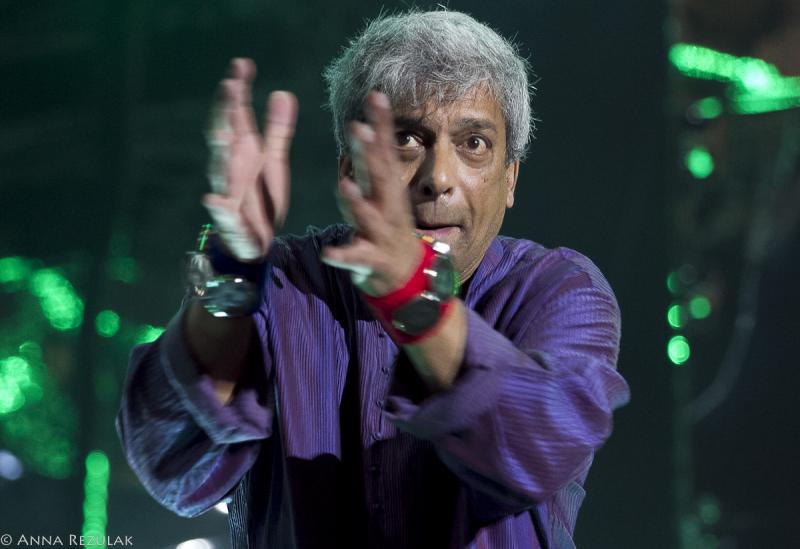 By ADRIANA CARCU
December 5, 2012
Sign in to view read count
Percussionist Trilok Gurtu belongs to that elevated group of musicians who, along their careers, have not only acquired a uniqueness of sound, but have also contributed to the widening of the notion of contemporary music. By crossing genre boundaries, and by mingling styles and ethnic influences, Gurtu has created and performed within the generous sound space he today defines as world music. Throughout his career, Gurtu has played with some of the most remarkable jazz musicians in the world, enhancing their music with his stunning capacity of emulation and response. Between 1974 and 2011 he has appeared on more than 175 albums, either alongside other musicians or on projects of his own. Trilok Gurtu is known amongst his peers as the percussionist who can make the Indian instrument called tabla talk.

All About Jazz: You are coming from a family with an illustrious musical tradition. Were you exposed to jazz along you early musical education?

Trilok Gurtu: I just went with the flow, because we were listening to all kinds of music. Jazz was something new. An Indian listening to [trumpeter] Don Cherry was like an American jazz musician listening to [sitarist] Ravi Shankar. In those times, Catholics had the monopoly of playing jazz in Bombay. To them, we were outcast if we played differently, because they did not know much about Indian music. Most of it came from rich influent people who heard jazz and also classical [music], so I was exposed to both at the same time.

AAJ: Do you remember the first time you heard jazz?

TG: It must have been in the radio when I was about 16. The tune I first heard must have been [pianist] Dave Brubeck,or something of the kind. At that time I was more interested in pop and rock. I was a rock drummer.

AAJ: You lived, for some time, in America. How was the experience?

TG: I decided to go to the Berklee College of Music. I wasn't a studied musician, you know, and I wanted to learn about composing and harmony more than about rhythm. And thank God I did not get admitted, because I wouldn't have been myself. I would have probably become a jobless, hardcore jazz musician. I think that I had a few cultural disconnects in those days. The main thing I was missing there was humility. I was very angry then, but now when I look back, America was a very good experience. I made many friends there and I played with many very good musicians like [drummer] Jack DeJohnette, [bassist] Dave Holland and Don Cherry.

AAJ: Where is the point of fusion between the Indian and the Western heritage in your music? Where do they separate?

TG: Long ago, I would have said that they are two separate things, but not today. Was it Rudyard Kipling who said that East and West would never meet? He was completely wrong. They may not meet politically, but they certainly meet musically. Because music, like God, is one entity that contains us all. It is separated by mind, the different concepts and rules everybody has. If we were humble enough we would recognize it as an entity. If you are open to it, it is easy. For me it is easy. I keep my mind open. Why close the door? I have always enjoyed all music. 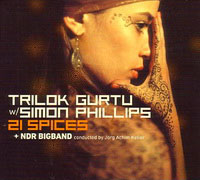 AAJ: Has the Western experience influenced your relationship to your instrument in any way?

TG: I only got better. I always knew what was good for me, so I didn't pick up everything [laughs]. If the basics are strong they don't need to change.

AAJ: Do you play differently, when you are in Europe?

TG: No. Why should I do it? Do you change your language? This is what people do to please the audience. I am here to play my music.

AAJ: Which phase of your formation proved most significant for your ulterior development?

TG: In the eighties I already had a musical personality, but it really came out when I met [guitarist] John McLaughlin, because, with him I really could play like myself. We met and he said immediately that we had to play together. He squeezed me in a really good way. That's when I found my identity as a musician. And I also squeezed him [laughs]. Meeting John was providential.

AAJ: Talking about meeting the right people, you have a long history of playing together with saxophonist Jan Garbarek. What brought you two together?

TG: We are very good friends. We've played together since the eighties, too, like with Ravi Shankar and [percussionist] Nana Vasconcelos. It is natural for me to play with him. If he starts something, I just play along. It all comes naturally. I don't have to think or struggle. I had the same thing with [keyboardist] Joe Zawinul or, as I said, with John McLaughlin. Now I start missing all these good musicians. There are so few left.

AAJ: Jan Garbarek, The African Project, pianist Tigran Hamasyan and trumpeter Paolo Fresu: so many different worlds and styles. What is the common denominator of your stylistic diversity?

TG: It is not so much a matter of style as a matter of a similar way of thinking. People who think alike get along well together. Sometimes it does not work and I have to stop it. I will not give names, but that happens too. So, I would say that it is a matter of personal and musical chemistry.

AAJ: Not long ago you recorded a song with Italian singer Adriano Celentano; how did that go?

TG: Italy is one of my favorite places: I like the people; I have many friends there; I even speak Italian. I like the food and the wine there. The recording with Adriano was fantastic. He is a great artist. It was fun to do that: the way he would explain what he wanted, and the way he kept forgetting my name. Just like Frank Zappa, who used to call me "Trislog" [laughs].

AAJ: Would you call yourself a jazz musician?

TG: What is jazz? If you say that jazz is American I am not going to answer this question. Indian music was the first music that was improvised. What is left of jazz if we take African or classical music out? Or even Apache music? Do you know how much trumpeter Don Ellis took from Bulgaria, for example? I am not a hardcore jazz musician. I like [pianist] Monk and all that, but I think that the term has become too restrictive. The term jazz has become discriminative because it is too narrow. You cannot put music in a box and start fighting about it instead of letting it be and develop. Let the great voice talk and not the small insects who talk about it. Let the great power in us talk. For that you have to give credit.

AAJ: Where is jazz going?

TG: To be honest, I don't really care. I am not a theoretician. I am not really interested in what it is called and what they are doing. There are fantastic gospel musicians who are really good. I like to hear it sometimes, but that's not what I play. I'm not sure if people understand that. Too much knowledge presented at the wrong time can go completely wrong.

AAJ: If you would give jazz a name what would that name be?

TG: I don't know what that name would be. Maybe world music. Call it what you want.

TG: I listen to Bach, Brahms, a lot of African and Indian music. I listen to Don [Cherry], to [saxophonist] Ornette Coleman. I also listen to the new stuff. I like the Norwegians a lot, and I also listen to some young American musicians. They are good for what they are.

AAJ: Are you still practicing?

TG: I do. I like to play, so I get together with my instrument as often as possible.

AAJ: Are you still nervous before a performance?

TG: If I am not sure of myself, yes. But now I am not unsure anymore. Once I became initiated by my spiritual master, Ranjit Maharaj, all weakness and fear was gone. I am a lucky man.

AAJ: What are you working on right now?

TG: I am working on a new album. We'll finish it in December and it will come out early next year. It is called Trumpets, and I play on it with Paolo Fresu, Nils Petter Molvaer, Ibrahim Maalouf and a very good classical German trumpet player named Matthias Hof. The music is already done. It is about Miles Davis and about Don Cherry, and one tune is about Dizzy Gillespie. I have two tunes of Miles; I have rearranged "All Blues" and "Black Satin," and from Don I've also got two tunes. The rest are compositions dedicated to them.