By BRUCE LINDSAY
April 6, 2012
Sign in to view read count 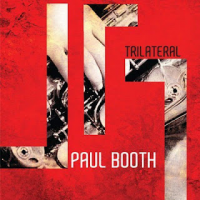 For some people the Big 4-0 is the key, for others it's the Big 5-0 or 6-0 or 7-0. For saxophonist Paul Booth it was his forthcoming 33rd birthday that proved to be a cause for reflection. As the day loomed in 2010, Booth was already thinking about a trio record with bass and drums. The apparent ever-presence of the number 3—"most everywhere I turned"—made Booth think again. The result is Trilateral, an album that is inspired by the number three in every way: three trios, nine tunes (each with a three- related title), and even a CD sleeve that unfolds as a triptych.

Booth is a well-established player, a respected sideman or collaborator with musicians such as guitarist Eric Clapton, vocalist Jane Monheit and trumpeter Ingrid Jensen and a regular member of multi-instrumentalist Steve Winwood's band. As a leader, he's released three previous albums. Booth has already proven himself to be a talented and adaptable player: Trilateral displays this adaptability but also showcases his strength as a composer.

The trio with guitarist Phil Robson and percussionist Adriano Adewale delivers a set of contrasting tunes inspired by South America and rural English folk. Booth's Brazilian-flavored "Chorinho Triangular" is blessed with an upbeat, irresistible, melody. "Trident," another original composition, retains the Brazilian flavor but its beauty is mellower and more contemplative. This group also performs Nick Drake's "Three Hours." Robson's acoustic guitar playing is a joy—softer and silkier than Drake's own style. Booth's soprano sax has a plaintive, melancholy quality and Adewale keeps his percussion subtle, yet still drives the pace.

Each of the trios on Trilateral could sustain an album's worth of tunes. Booth mixes the three groups' contributions, rather than simply presenting one trio after the other, ensuring a variation from tune to tune that helps to keep the sound fresh. The impressive result emphasizes the ongoing musical worth of the trio format: a format that Booth seems ideally placed to further exploit.