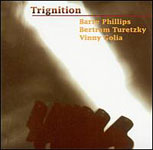 Pure improvised music is sometimes hard to listen to and even harder to write about. But given notice, the experience of challenging music can be gratifying. Multi-instrumentalist Vinny Golia has produced several recordings with contrabassist Bertram Turetzky, the duo Intersections (1986), and 11 Reasons To Believe (1996), plus trio recordings Pratakis with Leo Smith (1997), Triangulation with George Lewis (1996), and Glossarium with Ed Harkins (1998). The pair collaborates with Barre Phillips, a 1960s innovator of the contrabass and electronics. He performed on New York’s free jazz scene until 1972 when he moved to France. Barre has recorded with all the major creative innovators including Eric Dolphy, Lee Konitz, Peter Brotzmann, Archie Shepp, and Derek Bailey. Each man heard here is an old hand at improvisation, so there doesn’t appear to be any ego problems or leadership issues to resolve. Pieces begin and end sometimes surreptitiously, others with resolve. The combinations available with two basses are limitless. Arco with plucked strings or powered bottom overlays the imagination of Golia’s woodwinds and reeds. With over seventy-five minutes of music, there is much to ponder, interpret, and be challenged by.

The Incomplete Touching Of The Ground; Spherics & Whistles; Dale Of The Merry Years; Confirmation Of Judgement; Inconabular; Bigman, Hugeman!; Saylaa; It Was Probably The Last One To Be Named; Anodyne.