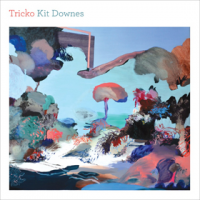 Tricko pairs composer and keyboard player Kit Downes with cellist Lucy Railton on a set of Downes' compositions. It's a delightful pairing, creating distinctive tunes inspired by minimalism, mutability and a few of the mysteries of the world.

Downes and Railton met when they were studying at London's Royal Academy Of Music. Downes has proven to be one of the contemporary music scene's most innovative and adaptable players, receiving a Mercury Music Prize nomination in 2010 for his Kit Downes Trio album Golden (Basho Records, 2010). As he describes it, his approach to composing these tunes was a process of incremental change, refusing to finish any piece on impulse. "As a result...none of my initial ideas survived, though each would lead, piece by piece, to the completion of the entire record."

Railton has worked as a soloist and in collaborations with dancers and visual artists, as well as co-directing the London Contemporary Music Festival. Tricko is Downes and Railton's first duo recording, although Railton has recorded with Downes previously, notably on Light From Old Stars (Basho Records, 2013).

Whatever this music's history may be, there's no denying its freshness. Whether Railton's cello is paired with piano or organ, her instrument combines with the keyboard to expand the sound, adding richness to the lower register and a fragile beauty to many of the melodies.

The music ranges from the bouncing piano rhythms of the title track to the low-key beauty of "Ihno." There's mystery, too, in the skittish rhythms of "Arkane" and in the Satie-esque "Jinn," both of which find Downes and Railton at their most energetic.

"Waira" (named for a mountain demon from Japanese folklore) plays out over the sound of rainfall. The patter of the raindrops serves as a gently percussive instrument: piano and cello are at their most spacious, the combination of Railton's waltz-time rhythm and Downes' delicate single-note phrases is beguilingly lovely. "Helkalen" is a slow, meditative, piece. Railton's lyrical cello lines float over Downes' piano, ending the album on a calm, almost ethereal note.