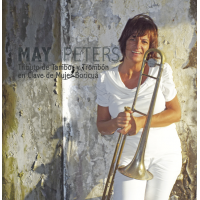 The personal attractions which originate with music can have life altering consequences, leading to total immersion in another culture and the discovery of oneself in the process. Trombonist May Peters is a perfect case in point. Born and raised in Holland, with extensive musical training, she has had a lifelong fixation with salsa music, which led her to relocate to Puerto Rico, culminating in her production of Tributo de Tambor y Trombon en Clave de Mujer Boricua.

This is an instrumental compilation of songs composed and performed by female Puerto Rican cabaret singers during the golden days of radio on the island, which was saturated with boleros, danzas, and mambos. Dramatic liberties were taken with the arrangements by pianist/producer Eric Figueroa, who set up all the songs with a dominant percussion factor and has Peters leading the charge with a ferocious combination of energy and finesse. Having paid her dues with numerous salsa, bomba, and plena bands, she obviously thrives in this environment and the results are impressive.

The musicians on this record are some of the best in Puerto Rico. Anchored by veteran bassist Ramon Vazquez and conga master Paoli Mejias, they are all experts in the Afro-Caribbean tradition and know precisely how each complex rhythmic variation should be executed. Peters melodically improvises through the songs as if surfing on a pulsing wave.

Starting off with "Dí Corazon," by the revered Sylvia Rexach, and going right into "Caramelo y Chocolate," by the risqué vedette Iris Chacon, Peters and company firmly lay down the familiar lyric lines, then the heat is turned up. The standout number is Lucy Fabery's "La Oportunidad"; clocking in at over eight minutes, it has plenty of room for stretching out and developing a solid groove. The pace is slowed down for "Medly Myrta Silva," a steamy bolero dedicated to the legendary Myrta Silva, who was known for her showmanship and flamboyant personality.

Though perhaps not familiar outside of Latin music aficionados, these women were influential artists and composers, and admired by generations. This tribute by Peters is exceptional and indicates her profound knowledge---both of the music and where it can be creatively transported.