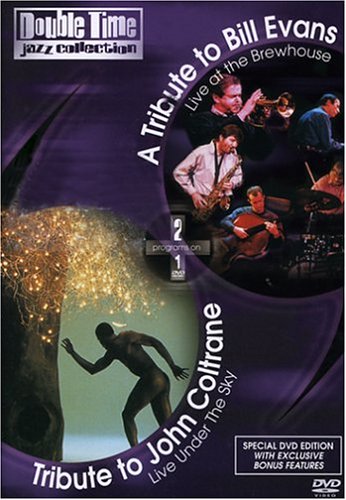 In its ongoing series of reissues under the Double Time Jazz Collection moniker, Eagle Eye Media has put together two tribute shows on one DVD that demonstrate how a conception that is reverent yet forward-thinking can work wonderfully in one instance, and somewhat less-so in another. Tribute to John Coltrane: Live Under the Sky is an almost relentless, take-no-prisoners homage to Coltrane that works because it tries to take his music to a new place that is nevertheless respectful of its roots. Tribute to Bill Evans: Live at the Brewhouse is less successful because, while the musicianship is uniformly excellent, the lineage to Evans is less direct. That wouldn't necessarily be a problem, except that things never quite seem to click with the quintet.

Tribute to Coltrane brings together Dave Liebman and Wayne Shorter on soprano saxophones, pianist Richie Beirach, bassist Eddie Gomez and drummer Jack DeJohnette for a 57-minute program that bristles with intensity from the get-go. Shorter is the perfect yin to Liebman's yang; impressionistic and abstract to Liebman's more overt expressionism and extremism. That's not to say Liebman overplays, he doesn't. But whereas Shorter came up at the same time as Coltrane, practiced together with him and, at least at one point as he explains in a brief interview at the start of the performance, was "exploring the same part of the universe," Liebman was more directly influenced as a youth by Coltrane, and so the lineage is more evident in his playing. But in the true spirit of Coltrane Liebman takes things a step further, with a personal stamp that has made him truly one of the most under-appreciated soprano saxophonists on the scene today. What is particularly remarkable about this '87 concert, featuring only four extended pieces, is how well Shorter and Liebman work together; their interplay on "India" and "Impressions" is particular empathic, two players who both have strong musical personalities and yet are also compleat listeners.

The only respite from the pulsing energy of this remarkable group performance is when Liebman and Beirach, associates for nearly 20 years at this point, perform a duet version of "After the Rain" and "Naima." Beirach's nickname is "The Code" because he has developed a unique harmonic language, one that may have the influence of McCoy Tyner as its starting point, but, like Liebman, has been enhanced and altered into something more personal. Watching him in duet with Liebman is, again, an opportunity to see, hear and feel an incredible chemistry.

Gomez is the rock and DeJohnette the maelstrom, creating his own tribute to Coltrane's sheets of sound while, at the same time, maintaining a firm pulse for the rest of the group to work from. For a group that didn't exist for any significant length of time, their ability to get to the essence of Coltrane's spirituality while asserting their own sensibilities is extraordinary.

On the other hand, the 53-minute Tribute to Bill Evans: Live at the Brewhouse is a collaboration that looks great on paper but never seems to quite come together. What can be said about trumpeter Kenny Wheeler? He's clearly a giant of the jazz trumpet, someone who singer Norma Winstone once called "the Ellington of our time," and he plays with his typical melancholic lyricism and impeccable technique. Woodwind multi-instrumentalist Stan Sulzmann is equally capable, and when he is improvising in tandem with Wheeler there are some moments of magic. Pianist Gordon Beck clearly understands the link to Evans with a style that is, however, somewhat more direct. Bassist Dieter Ilg may be the surprise of the show; always a solid foundation, his solo piece is an exercise in incredible technique mixed with rich musicality.

The problem may ultimately lie with drummer Tony Oxley. Oxley is a completely unique drummer with a hybrid kit of traditional drums and assorted other smaller drums, odd-shaped cymbals and a cowbell-shaped piece of metal that looks like it would fit on Paul Bunyan's ox Babe. His free-wheeling approach has worked exceptionally well in more liberated contexts including Polish trumpeter Tomasz Stanko's mid-'90s quartet and work with British woodwind player John Surman, pianist Paul Bley and bassist Gary Peacock. And despite his more outward-reaching tendencies he obviously has a firm grasp of swing. But in this context his turbulent playing doesn't quite work. Ilg works hard at maintaining groove throughout, but it seems as if he's always at odds with Oxley, who creates a tempestuous layer that seems to dominate the entire proceeding.

That doesn't mean that Tribute to Bill Evans is a waste of time. With players of this caliber there are definitely bound to be moments where sparks fly. But, sadly, the project fails as homage, because the interplay that was so essential to the core of Evans' work seems to be missing here for the most part.

Still, the Tribute to John Coltrane segment is more than compelling enough to justify the DVD. And while Tribute to Bill Evans may be a somewhat failed attempt, there is enough fine playing to make it a worthwhile watch.

Tribute to John Coltrane: Live Under the Sky

Tribute to Bill Evans: Live at the Brewhouse