By JERRY D'SOUZA
December 9, 2008
Sign in to view read count 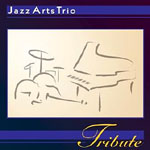 Recreating music note-for-note is fraught with pitfalls. It could be as palatable as drinking a soda after all the fizz has escaped or it could stand deep in the shadow of the original. But as the saying goes, imitation is the best form of flattery and the Jazz Arts Trio makes that apparent as they reinterpret 11 performances with flair and skill.

Frederick Moyer (piano), Peter Tillotson (bass) and Peter Fraenkel (drums) were friends who went their separate ways after high school. They met again in 2007. It was at this time that Moyer got the idea of transcribing the songs on this CD, which includes six by pianist Oscar Peterson who passed away while this project was underway.

The choice of tunes is nifty. It gives Moyer the chance to show his skills in the various settings, playing a profusion of notes with clarity like Peterson, or drawing back and reflecting like Bill Evans. That he can capture a mood and make it palpable is testimony to his technique and creativity.

Any of the tunes that Peterson played are worthy of attention. "Blues Etude" has Moyer shuffling the rhythm and the pulse and emphasizing the chords. His two-handed approach adds to the impetus and it's delightful how the chords complement his runs.

"Lonely Woman" retains the emotional pith. With Tillotson and Fraenkel as gentle complements to the development, Moyer lets the ballad open its doors and invites the listener to an entrancing performance.

This is an impressive and sincere tribute.