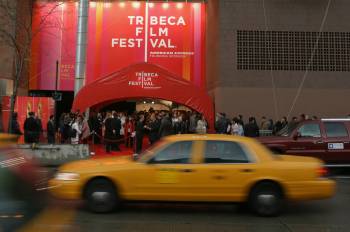 By CHRISTINE CONNALLON
May 5, 2013
Sign in to view read count
Tribeca Film Festival
New York, NY
April 17-28, 2013
Celebrating its 12th stellar year, the Tribeca Film Festival showcased the best and brightest films to an ever-increasing number of eager viewers. Founded by Jane Rosenthal, Robert De Niro and Craig Hatkoff, the mission of the festival—to enable the international film community and the general public to experience the power of film by redefining the film festival experience—remains as strong today as it was at its inception.
With over 6,000 film submissions considered for the coveted 169 slots that existed this year, there were projects covering all categories of competition feature films, from narrative and documentaries to short films, representing 37 countries. One of the greatest gifts of attending a festival of this magnitude is the exposure to films that would have otherwise flown beneath the radar, as well as seeing the premiere of a film and sharing exciting new film news with friends.
2013 was the first year that the Tribeca Film Festival skillfully included music in a broader sense, with a concert by The National following the opening night Gala of the group's new film, Mistaken for Strangers, as well as a closing night concert with Vampire Weekend, directed by Steve Buscemi and streaming live to fans as part of the #amexUNSTAGED series.

Films that centered on music as a theme were strong this year. Mistaken for Strangers was a true festival standout, selected by programmers to kick off the festival. The National released its fifth album, High Violet (4AD) in 2010, and the popular band was prepared to embark on the largest world tour of its career. When lead singer Matt Berninger invited his younger brother Tom to be a roadie for their tour, things were not the way either sibling anticipated them to be. The film, directed by Tom Berninger, mines many different areas . Going beyond a tour film, the audience is privy to life on the road, but also gets a behind the scenes look at a pair of brothers separated by nine years and in vastly different places in their lives . After 10 years in the band, Matt is a professional, intensely focused on the job at hand, while Tom, a fan of metal music and a filmmaker who specializes in short horror films, is much more lax in his approach to responsibilities. Surprisingly honest, Mistaken for Strangers is a treat for fans of The National, as well as the perfect opportunity to introduce the band to new fans.

Greetings from Tim Buckley, by director/co-writer Daniel Algrant, is an absorbing look at the relationship—or lack thereof—between two iconic singer/songwriters: father and son, Tim and Jeff Buckley. Set in 1991, a young and still mostly unknown Jeff Buckley, poised for success, comes to terms with his absentee father when he is invited to a memorial concert for Tim held in Brooklyn, NY. Penn Badgely capably tackles the role of the haunted and out of sorts Jeff, with a chance to showcase his formidable musical talents. A glimpse into folk singer Tim Buckley's life is carefully constructed through flashbacks from the '60s, as he and a girlfriend head across the country just before Jeff is born. Ben Rosenfeld is wonderfully cast as Tim, bringing charisma and empathy to the part. The portrayal of Tim is enhanced by Jann Klose's musical ability, providing beautiful vocals and guitar work for Ben, who did not sing in the film, while Imogen Poots brings a sense of innocence as Jeff's love interest. The performances that comprise the memorial concert for Tim deepen the film's emotional resonance and truly bring the film full circle.

Keep an eye out for both Mistaken for Strangers and Greetings from Tim Buckley, two fascinating films that music fans should not miss.