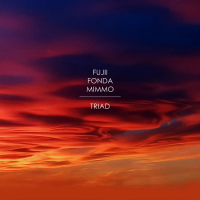 It's difficult to cherry pick recordings from pianist Satoko Fujii's 60th-year birthday celebration releases that are coming at us every month in 2018. There are solo recordings, sessions with her various jazz orchestras, duos, trios and quartets. Can you pinpoint her as a composer, arranger, or improviser? Yes, yes, and yes. She's accomplished in every aspect of jazz, from free to noted and folk to avant-garde. Her creative energies burn as brightly as that of David Murray in the 1990s, and Ivo Perelman in this new century.

This trio recording with bassist Joe Fonda and saxophonist Gianni Mimmo is an excellent example of the universality of her approach. While she had recorded with Fonda previously in 2015 Duet (Long Song, 2016) and toured with the bassist in 2017, this session was made a day after Fujii and Fonda's first performance with the Italian saxophonist. It is remarkable how quickly this trio comes together to produces this fully formed outing.

The centerpiece of Triad is the 42-minute "Birthday Girl" which, you guessed it, was recorded on Fujii's 59th birthday. The piece is a cornucopia of plenty. It flows from the metaphysical to the concrete. Song forms bubble up along with waves of energy only to subside and be replenished. Fujii's percussive attack is soothed by Mimmo's sympathetic soprano lines and Fonda's bowed mediations. That is, until the three decide to churn the waters. Mimmo, who might be the Italian equivalent of Evan Parker maintains a sound that's always attentive to his partners' technique. It is the four shorter pieces (none reaching 5 minutes) that enlighten the most. Each finds the musicians fully immersed in the process. "Available Gravity" features Fujii working inside her piano, Fonda taking up a flute, while Mimmo lays down atmospheric tones. The frenetic "No More Bugs," and the jabbing dance of "Joe Melts The Water Boiler" are brief yet fully formed pieces that could lead you to believe these three have been working together for decades.