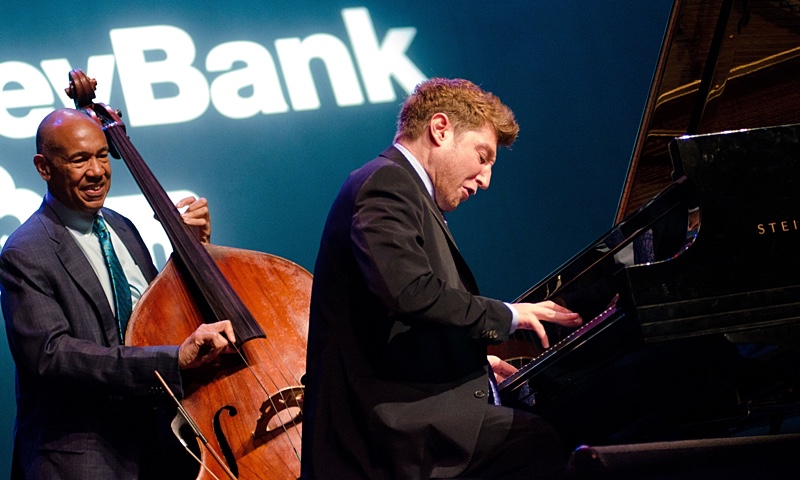 For the second time in its 36-year history, Tri-C JazzFest lit up downtown Cleveland with a three-day midsummer jazz festival that mixed paid shows from national headliners with free outdoor performances featuring musicians from Northeast Ohio. Home to all these festivities would be the highly acclaimed Playhouse Square area, with an outdoor plaza being utilized for the free concerts that ran each day from three o'clock to midnight. Also taking a prominent role this year would be a culinary focus, thanks to the offerings of local restaurants and the college's Hospitality Management Center. In addition to demonstrations from area chefs, there were also recipes offered up by producer Tommy LiPuma and bassist John Clayton.

Revelries got officially underway on Thursday evening, July 9th in the largest of the venues at Playhouse Square, Connor Palace. A full half hour was devoted to salutations, introductions, and corporate acknowledgements from a host of folks, including festival director Terri Pontremoli and recording arts director and icon Tommy Li Puma. When trumpeter Dominick Farinacci finally took the stage with his quintet, he wasted no time in getting to the point with a mature and satisfying set that shows just how far this Cleveland native has come in the past few years.

Farinacci's originals supplied excellent fodder for his ensemble to explore and his own trumpet solos told a story with a wonderful sense of pacing that is rare among musicians his age. "Doha Blues" provided the perfect opportunity to sample the percussive brilliance of Jamey Haddad, who used what looked like a pair of straw whisk brooms to tap out a beat on his hand drums.

The highlight of the set would be the surprise appearance of vocalist Gregory Generet, setting things ablaze first with an up-tempo "Mr. Kicks" before settling deep into the vibe of Marvin Gaye's "Inner City Blues." Pianist Richard Johnson also found this setting inspirational as he followed Generet with a stunner of a solo that included a sagacious quote of Shorter's "Witch Hunt." As if to make sure he covered all bases, Generet then turned to the blues for the barn burner "I'm Your Hoochie Coochie Man." Farinacci would then wrap things up with "Tango," a perfect conclusion to a masterful and engaging set.

Following a brief set change, the Clayton-Hamilton Jazz Orchestra would launch into an all-too-brief performance that offered the kind of visceral impact you can only get with a big band. Formed almost thirty years ago, the CHJO is stocked with talented soloists that deliver on a strong book of material that includes originals by both leaders.

"I Be Serious About Them Blues" gave the crowd ample exposure to the solo genius of the renowned trombonist George Bohanon. John Clayton's clever take on Monk's "Evidence" featured a great trumpet soli spot featuring Gilbert Castellanos, Bijon Watson, Clay Jenkins, James Ford, and Joe Magnarelli. On a gentler note, the Brothers Clayton bewitched the audience with a wonderful arrangement of "Emily," John on bowed bass and Jeff on alto saxophone. Finally, the CHJO debuted Jeff Hamilton's "Cybill's Day," a shuffle number that also put the drummer in the spotlight for a typically tasty display of musical drumming.

The vibe totally changed once Take 6 walked on stage. Aside from the two brief pieces they would perform with Clayton-Hamilton, the vocal sextet took over the festivities with a style that is more pop inspired than jazz based. As the eighteen members of the CHJO looked on, Take 6 ran down a typical set, featuring such tunes as The Bee Gees' "Staying Alive," Pharrell's "Happy," and Stevie Wonder's "Overjoyed." For what they do, Take 6 has honed their skills into a crowd-pleasing venture. Oddly inconclusive, it seemed like a missed opportunity to not have integrated the repertoires of both Take 6 and the CHJO.

Friday's festivities shifted the focus from jazz to blues and smooth jazz. Spread over three shows, the evening kicked off with a celebration of the music of Robert Lockwood Junior. The second set shifted to the pop sounds of Brian Culbertson, Kim Waters, Peter White, and Brian Simpson. Then, the evening wrapped up with the New Orleans Creole leanings of C.J. Chenier, Nick Sample, and Ray Parker, Jr. Since these shows proved to sit squarely outside of the mainstream jazz genre, this reviewer has opted to bypass a more detailed analysis.

In terms of sheer density, Saturday packed quite the wallop, with eight free shows competing with five paid gigs that got underway starting at one o'clock. Aside from Ernie Krivda's tribute to Quincy Jones and a set by Pete Escovedo's Latin Jazz Orchestra, the remaining offerings were double bills of contrasting tastes and styles.

Although they would actually go on way over an hour past the slated show time, this reviewer's first music of the day would be provided by trombonist Wycliffe Gordon and his International All-Stars. Opening with Ellington's "Pie Eye's Blues," the quintet indeed sported a cast with varied backgrounds, yet their electrifying message proved to be universal in appeal. With Gordon belting out the vocals to "On the Sunnyside of the Street" and "Bourbon Street Parade" you couldn't help but bask in the joy of this indigenous music given a fresh coat of paint by the ensemble.

Playing both tenor saxophone and clarinet, Adrian Cunningham was every bit the able sparring partner to Gordon, while drummer Alvin Atkinson, Jr. dazzled with his enthusiasm, flipping his sticks and grooving along in the best second line tradition. His feature on the closing "Caravan" even found the drummer utilizing some wordless vocals to establish the mood before Gordon let loose with a volcanic statement of his own.

By contrast, vocal ingénue Cyrille Aimee went for a smoky and less incendiary set that was also somewhat less engaging overall. Mixing in pop ditties, with jazz standards and her own quirky originals, Aimee follows in the spirit of her native France and the swing style of Django Reinhardt. The unique flavor of her group comes from the use of two guitarists, one on electric and the other on acoustic. The Doors' "People Are Strange" lived up to its title with an odd rendering by Aimee. Much more successful was a quicksilver romp through "Love Me or Leave Me" and the lovely duet with bassist Shawn Conley on "I'm in the Mood for Love." In the final analysis, Aimee's muse is an acquired taste to be sure.

In his first Cleveland appearance, vibraphonist Warren Wolf left no doubt that his jazz credentials are strictly top-notch. Classically trained, Wolf has lately been establishing himself via a string of excellent releases on the Mack Avenue label and just recently took over the vibe chair of the San Francisco Jazz Collective. With a trio of like-minded compadres, including Clevelander Theron Brown on piano, Wolff straddled between the vibes and Fender Rhodes piano. He skillfully set the mood for Bobby Hutcherson's "Montara," a beautiful peace that Wolf used to cast a nod to one of his inspirations. Yet, Wolf managed to make it his own, his improvisations unfolding in a logical and musically variegated manner.

On the flipside of this double bill would be a tribute to Ray Brown led by pianist Benny Green in a trio with John Clayton and Jeff Hamilton. Since his days with Art Blakey's Jazz Messengers in the '80s, Green has proven to possess an encyclopedic knowledge of the jazz piano legacy. In more recent times, he has renewed his efforts in a manner that makes his performances ignite with sheer intensity and displays of technical brilliance.

One of his mentors, the late bassist Ray Brown gave Green an excellent stage for his development and he paid his appreciation with a stimulating set that was easily the highlight of the entire festival. Brown's arrangement of "The Summer Wind" provided an archetypical framework for this trio's use of dynamics, tempo, and mood setting. You could almost hear a pin drop while the trio voiced "Lil Darlin'" with a know-how that only comes with the mastery of what drummer Kenny Washington calls "the adult tempo." And for a taste of that Nawlins second line groove, Hamilton stoked the coals of "Gumbo Hump," while Green dazzled with a hard driving statement of his own.

Back over at the Palace, the evening hours were ushered in by west coast luminary Pete Escovedo and his Latin Jazz Orchestra. Making this event a special one was the celebration of Escovedo's eightieth year on the planet and the addition of daughter Sheila E. and son Juan Escovedo to the percussion ranks. Add to the mix guitar icon Ray Obiedo and saxophonist Justo Almario and you have the making a magical evening. If it not for the fact that rows of seat literally met the front of the stage, impromptu dancing would have been the order of the night.

Closing out the festival would be yet another double bill. Up first, Trinidad native Etienne Charles and his Calypso Review would tap a world beat vibe dominated by the steel pan of Leon "Foster" Thomas. On trumpet and congas, Charles would lead the ensemble through its paces, although his own time in the spotlight was somewhat limited. Vocalist Keith Prescott would dominate the middle part of the set, including an overblown and unnecessary effort to get a crowd of listeners down front to dance. The music had its moments, but they were far too few to make the set memorable.

By contrast, Joey DeFrancesco literally pulled out all the stops to make the most of his slot as the festival closer. He has put together yet another fine trio featuring Cleveland-based guitarist Dan Wilson and drummer Jason Brown. Opening with "The Preacher," DeFrancesco left no doubt about the fact Jimmy Smith still is one of the main dudes to butter his bread, so to speak. Wilson's original, "Who Shot John?" was a stunner in every way, including the guitarist's own time in the solo spotlight.

Giving his set some variety, Mike Boone was added on bass. This gave Joey the opportunity to step out from behind the organ to vocalize and blow some sweet trumpet on "The Touch of Your Lips." He also sat down at the piano for a lively trio performance that led one to wonder why he has not previously explored the 88s. Back at the organ, the twelve bar blues was the order of the evening for some Mumbles style scatting and another rousing solo that would close things down well past the midnight hour.