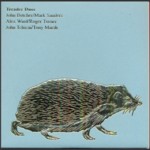 These three contrasting reeds/drums duos are a fine record of the concert at which they were recorded, in February 2008 at St Giles-in-the-Fields church, London. Each of the three tracks lasts about twenty five minutes, long enough for the duos to give a good account of themselves. The three tracks give an opportunity to hear some fine improvisers as well as to compare their differing approaches to the combination of reeds and drums.

The album opens with John Butcher and Mark Sanders already sounding warmed-up and tuned into each other. Sanders lays down a delicate pattern of cymbals alongside which Butcher's tenor constructs a full-bodied, melodic solo. As the drums become more assertive, the sax replies in kind and the two match each other every step of the way. Throughout, there is ebb and flow between sax and drums with no leader or follower but the two combining to keep up a compelling forward momentum. With close listening, one can hear Butcher subtly shifting the quality of his horn by altering his embouchure or by use of his tongue, but such technical shifts are so well integrated into his whole performance that they largely pass unnoticed. Across the piece, the pair displays a well-judged sense of dynamics, bringing it to a suitably dramatic climax.

Next up is the very different combination of Alex Ward on clarinet and Roger Turner on drums. Both are seasoned improvisers, with Ward these days as comfortable on guitar as on clarinet. Here, as with his guitar playing, he sounds as if he has soaked up clarinet influences and integrated them into his own eclectic personal style. The pair begins with a flurry of activity that borders on hyperactive before settling into a more relaxed mood. Ward uses a range of extended techniques, including removing the mouthpiece and playing it alone. In typical fashion, Turner is a hive of activity, but the restraint of his playing belies the energy he invests in it. The end results are a model of good taste. A sample of this duo's interaction is shown in the clip below, recorded by Helen Petts at this actual concert.

By way of contrast, John Tchicai opens with some vocal ululations leading into a call and response between his voice and saxophone, the mellow sound of his tenor sax complementing the voice well. Tony Marsh's drumming provides understated support without stealing the spotlight from Tchicai. When Marsh is given his own space, he delivers a well-constructed solo. As a pairing, this duo gets closer to free jazz than either of the other two. Tchicai's introduction of bass clarinet in the finale provides a welcome contrast to sax and brings the album to a satisfying end.

Tooth Pivot; The Pews; We Dare To Sing.