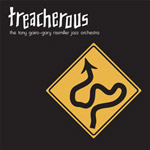 A working big band performing Tuesday nights at the Indulge Restaurant and Night Club in Allentown, Pennsylvania since 2003, the Tony Gairo-Gary Rissmiller Jazz Orchestra debuts with this album sculpted in the finest big band jazz tradition. Led by saxophonist Tony Gairo and drummer Gary Rissmiller, this sixteen-piece ensemble of local players lays down eight tracks of sizzling big band music recorded live, in real time with no overdubs. All of the music was composed and arranged by Gairo, whose inspiration for the title piece was surviving what was supposed to be a short ride home—which turned into a dangerous two-hour trip through a snowy winter evening in the dead of night.

In what seems a celebration of his arrival home, "Treacherous" begins with a burst from the brass that exclaims, "I made it!" The signature piece of this album comes with a heavy big band arrangement that's loud, exciting and very alive. "Elusivity," composed in stages, is a delightful chart with tempo changes showcasing a fine woodwind section. Gairo is prominent on a scorching soprano solo, while pianist Skip Wilson hits those keys on a chorus that sets up Rissmiller with a forceful drum solo.

The music becomes a bit more challenging and complicated on the next two tracks. "Deadlines, Distractions and Diversions" tends to move rather quickly in a hard bop style that not everyone may appreciate. "Portrait of My Wife (In Many Colors)" slows down the pace in a quiet, melancholy fashion. The beat picks right up on "Between The Pipes," another stellar big band tune that the ensemble plays with power. This beast of a performance, my pick for the best track, is marked by several outstanding solos.

There are no standards on this recording, but if I didn't know "Poke and Hope" was a Gairo piece, I would have thought it was an Ellington composition. This nice ballad with a little muted horn and a clarinet excursion by Gairo has the old soft swing feel of an Ellington tune. The bookend number to the title cut, "Revisited," is a red-hot chart which packs a punch. These ten minutes of hard-swinging, foot-stomping blistering big band music include a slew of solos, of which the best is from Paul Kendall's steaming baritone.

This largely unsung group of professional musicians from the Bethlehem, Pennsylvania area makes quite a statement with Treacherous. Excellent charts by Gairo and inspiring and lively performances by the band lead me to believe that this will not be the last we will hear from this new East Coast phenomenon on the big band scene.

Treacherous; Elusivity; Deadlines, Distractions, and Diversions; Portrait of My Wife (In Many Colors); Between the Pipes; Supermarket Sushi; Poke and Hope; Revisited.