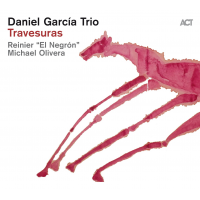 Opening with an expressive take on Paco De Lucia's "Potro de Rabia y Miel," the Daniel Garcia Trio (the pianist/leader with acoustic bassist Reinier "El Negron" and drummer Michael Olivera) displays the freedom of artistry and demeanor that establishes the tenor and mindset employed throughout the album. A song written for his mom, "Oniria," which translates to dreamland, intersperses a brief audio cassette conversation from his childhood, between his mom and a three-year old Daniel. A highly personal touch is rendered to this loving ballad.

The first measure of a recurring theme, "Dream of Mompou #1," gently guides us to the title track. The four-part tetralogy is based on the works of heralded turn of the century Spanish classical composer Federico Mompou. "Travesuras" can only be roughly translated as the type of innocent mischievous behavior of a child's discovery of the world. The music itself can definitively be described as bold. Shifting directions in adventurous manners, the composition is as elegant as it is striking.

It's the title track that is breathtaking, and indeed aptly represents the heart and spirit of the record. "Dream of Mompou #2" restores our breathing, as is its purpose, before venturing into "Alegrias pa Averio." "El Negron" exquisitely provides the framework for the flamenco-laced tune that is a bounty of happiness in both feel and in the joy of Garcia's free expressionism. Olivera's in the moment percussion brings his own smile and style to the mix. "La Comunidad" is a brisk and jaunty tango-paced and jazz-laced ride with sumptuously played and arranged stops and starts. It's an attentive piece that rivals "Travesuras" in having the characteristics and revelations of a title track. Highlighted by percussive waves of energetic emotion by Olivera, "La Comunidad" is a shining example of Garcia's deft ability to merge genres with an ease of sensibility, yet with uninhibited abandon.

After refreshing the palette with "Dream of Mompour #3," we move on to a song dedicated to the great one, Miles Davis. Garcia renders an adaptation of "Solea" from Sketches of Spain (Columbia, 1960). The characteristic brilliance of Miles Davis' improvisations is reimagined and presented in "Dream of Miles" with the actual nuances and precise rules of nineteenth century flamenco style Solea. Tradition is eschewed in "Vengo de moler." An old traditional song from Garcia's homeland is offered up in ambitious fashion. Abundant in chops, it triumphantly maintains the rooted jubilation of that time past. Garcia is again fervent and buoyed by the animated passion of El Negron and Olivera. Flautist Jorge Pardo joins the ensemble and breezily lights the trail before it again erupts like an ancient volcano. A spectacular conclusion to an album driven by an inner quest for excellence. But alas, there is more. The tasty final movement of "Dream of Mompour #4," is served as a delicacy to round out the musical feast.

With the exception of "Potro de Rabia y Miel," written by Paco de Lucia and Camaron, and the traditional "Vengo de Moler," all compositions are penned by Garcia. Alternately intimate and exuberant, Garcia's careful precision and alignment incorporates the verve and improvisation of jazz, with the vibrance of flamenco and tango, and the structured stoicism of classical music. Looking to the future, while engaging and integrating elements of the past and present, Travesuras significantly showcases modern fusion.