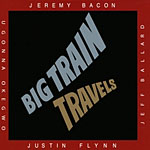 The title of the record may seem innocuous, even a tad trite (journeys across musical landscapes and that kind of stuff)... But then by the sound of it Big Train is more than a couple of journeymen. This is a duo that is rattling against convention. Pianist, Jeremy Bacon and tenor and soprano saxophonist Justin Flynn have undertaken these musical Travels forging a powerful partnership with bassist, Ugonna Okegwo and drummer Jeff Ballard. The result is more than a meeting of minds. It is something of a spontaneous combustion that burns the proverbial envelope after it has been pushed off the deep end of harmony and rhythm.

Musicians often challenge each other and push each other around by throwing brazen ideas at one another while playing. These gentle—and sometimes even vigorous, argumentative—conversations almost always egg the musicians on to leaping out into the harmonic and rhythmic unknown and in many instances produce memorable musical testaments. It takes chemistry and between them these four musicians the reaction is often catalytic. Along the way, of course Jeremy Bacon and Justin Flynn also doff their invisible hats to the musicians who have paved the way for them, the relative elders, so to speak. This respect for tradition that enables musicians to reach far, far back in order to break fresh ground is what keeps the music alive. To this extent, Bacon and Flynn have made a good start.

The song titles are fresh without being pretentious. For instance "Koan and The Philosopher's Stone" highlight the best features of the musicians—in terms of ideas and virtuosity. Both songs are endlessly inventive. In the first, Jeff Ballard rings in the melody literally with a steady, clipped rhyming figure on the high hat then a polyrhythmic clatter of rim shots and rattle of skins providing the sign for Flynn to moan his way in on tenor. Bacon contributes a wildly intricate right hand with an irregular vamp from his left as Okegwo lets out a throaty, pizzicato grumble and the song is on its way. The only assurance is that surprise after surprise will follow.

"The Philosopher's Stone," an unabashed tribute to Wayne Shorter during his Blue Note days, finds Flynn darting up and down the registers, but Bacon is restrained. Okegwo walks with a jaunty skip and Ballard often runs riot. "The Owl" mirrors the swooping and gliding of the nocturnal bird and is a crepuscular tryst between harmony and rhythm. "The Crane" flies gracefully—and sometimes gawkily. Kurt Weill's "Low Speak (Speak Low)" and "Bamboo" re creates the song's rhythmic architecture so that becomes a more intriguing interpretation of its inner voicing.

Bacon and Flynn approach composition from almost diametrically opposite standpoints. The pianist is almost cubist in his approach to rhythm, relying on intrigue to make waves. The saxophonist on the other hand has a penchant for circular energy and his melodies are infectious, almost electric, like "Rosebud," and his soprano feature here. Together they form an unusual bond with bass and drums to grow the musical ideas almost organically, which results in creating a state of wonder.

Koan; The Philosopher's Stone; The Owl; Low Speak (Speak Low); Time's Flow; From Mountain To Valley And Back Again; Redbud; Bamboo; The Crane.